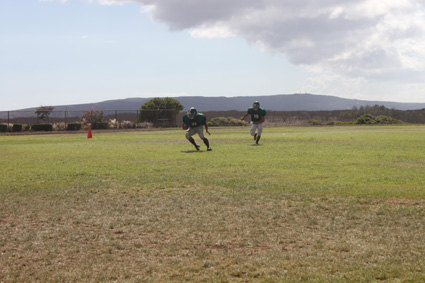 The Farmers football team dominated their home field against Hana High Dragons on Saturday, winning 42-0. This was the first home game of the season, and the win brings their record to 1-1, having been defeated by Seabury Hall last week on Maui.
The Farmers’ offensive line scored five touchdowns in the first half and one in the second. Their solid defense kept Hana from scoring any points the entire game.

“The best thing [about this game] was that everybody had an opportunity to play,” said Molokai High School’s (MHS) head coach Mike Kahale after the game. “And it was exciting to get our first win at home in front of this crowd.”

Hundreds came out to show their support for MHS’ first sanctioned football team since 1960. Alumni from the original team were recognized during halftime. There were also food booths, T-shirt sales and pull-ticket drawings, which helped MHS Football raise over $600.

Despite their relentless lead against Hana, MHS coaches stressed the need for the team to stay humble.

“They [Hana] are just like us –they need help, support and encouragement,” assistant coach Hanohano Naehu told his players. “Be brothers and pick up their spirits. We like make relationship with these guys.”

“There is always room for improvement,” added Kahale. “Let’s not lose focus.”
The Farmers next play St. Anthony this Saturday at MHS at noon.