Hokulea to Visit Molokai This Week

A vessel representing thousands of years of Hawaiian culture and history will soon dock on Molokai. The Hokulea, a replica of a traditional Hawaiian wa`a kaulua, or double-hulled voyaging canoe, was completed in 1975 and set sail on its first voyage to Tahiti a year later. The vessel has come to represent a cultural awakening of Native Hawaiian seafaring as well a message of aloha aina (love of the land) and the importance of caring for each other and our resources.

“I sailed in 1976 but my real voyage began after that — to apply the lessons we learned to better myself and my community, and to be a better steward,” said Penny Martin, Molokai resident and one of Hokulea’s original crew members. “The voyage opened my eyes to what a wonderful place Hawaii is and how need to take better care of it. It’s been a 37-year voyage.” 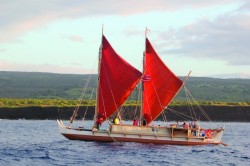 Nearly 40 years and 135,000 nautical miles after its first voyage, the Hokulea has embarked on its longest journey yet — a worldwide voyage that will span three years, 46,000 miles, 21 countries and at least 65 landfalls. Beginning with a five-month tour of Hawaii, the Hokulea will stop on Molokai July 8 for a scheduled week-long visit.

“I think it’s a great honor for us to be included in the voyage,” said Martin of the Molokai visit. “All the hands that will touch Hokulea while she’s here will lend their mana to the voyage. She’ll leave stronger and we’ll be with Hokulea as she sails.”

During Hokulea’s stop at the Kaunakakai Wharf, community members will have the opportunity to board the vessel throughout the week during designated hours, participate in a potluck dinner and presentation, and engage in a variety of organized learning and sharing events.

As many as eight people from Molokai may participate as crew during various legs of the worldwide voyage over the next three years, according to Martin. Local waterman Mel Paoa is the designated Molokai captain for the vessel, while Martin was one of the first two females to sail on a voyaging canoe in 200 years during the 1976 voyage. She and Paoa are also founding members of the Ohana Wa`a voyaging community, made up of members from around the state.

Don’t Miss the Ship
The Hokulea will likely dock at the wharf sometime in the evening of Monday, July 8, depending on weather conditions. That night, friends and ohana of voyagers will gather for dinner. Tuesday, July 9, the community is invited to a potluck and presentation at Kulana Oiwi, beginning at 5:30 p.m., with an opportunity to view educational material. A pule and dinner will begin at 6, and at 6:45, the community will have the opportunity to aloha the canoe with offering of words or ho`okupu. A speaker for the Polynesian Voyaging Society will talk about the Hokulea and the Worldwide Voyage at 7 p.m.

On Thursday, an event will be open to Molokai teachers only at Ka Honua Momona’s Ali`i Fishpond starting at 9 a.m. Educators from around the state working on teaching material for the Worldwide Voyage will share with local teachers how they can be involved with their students. At noon, Uncle Herbert Hoe will provide ai pono lunch for participants.

Tuesday, July 9 through Saturday, July 13, the Hokulea will be open to the public tentatively from 9 a.m. to noon and 1 to 5 p.m. (crew members must be on board to receive guests.) In addition to the community events and public open house at the canoe, there will be organized teaching events for various educational groups. This is also an opportunity for off-island educators and crew members to learn about how Molokai is caring for its resources and learning to be sustainable.

“Hokulea sails with a message of sustainability and aloha aina — it’s not just a three-year cruise around the world,” said Martin.

Beside the Hokulea’s visit, its escort canoe, the Hikianalia, may also make a visit to Molokai on July 6. The Hikianalia is a double hulled voyaging canoe built specifically to escort the Hokulea, and it has a solar-powered motor. All schedules are dependent on the weather and health of the canoes.

The Molokai Voyaging Ohana would like to thank all those who have already volunteered to help in so many ways during the Hokulea’s visit this month; Martin said without them it wouldn’t be possible.