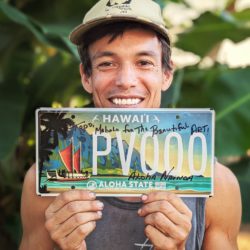 Hawaii residents have a new license plate option that supports and honors the Hokule’a voyaging canoe and the Polynesian Voyaging Society. The plate was designed by Molokai’s Todd Yamashita, an artist and graphic designer who worked for the Polynesian Voyaging Society for five years during the Worldwide Voyage and also served as a crewmember during one of the journey’s legs, along with other Molokai crewmembers.

The plate features a depiction of Hokule’a at the Hakipu’u area on Oahu, a place important to Polynesian voyagers for more than a thousand years, according to Yamashita.

“In 2017, just after Hokule’a had returned from her historic worldwide voyage, I sailed with a small crew from Magic Island to Hakipu’u and spent the night onboard doing anchor watch. The entire next day would be filled with cultural and spiritual celebrations… A time for blessings and celebration,” explained Yamashita. “However, in the predawn hours, no one had yet arrived. I can remember the sunrise that morning as it rose over Mokoli’i and the first rays of light cast over Hokule’a. To witness and actually feel Hokule’a in this deep state of peace after voyaging 17,000 miles… Feeling her actually feel at home after more than four years at sea, was a spiritual and aesthetic moment I’ll never forget.

“For this license plate, it was only natural for me to somehow want to capture the importance of Hakipu’u to Hokule’a, but most importantly, the essence and beauty of this relationship.”

Last May, Gov. David Ige signed legislation into law that allowed the Polynesian Voyaging Society (PVS) to create and sell a commemorative license plate to support its continuing mission of promoting Malama Honua.

The canoe’s six-year Worldwide Voyage had concluded, connecting communities in more than 150 ports in 18 nations to the global impacts of climate change, according to PVS. With more voyages planned in the future, and ongoing environmental education efforts, the plate’s proceeds will go towards the cause.

For Molokai residents wanting a plate, they will be available in Maui County starting next month for about $35, according to PVS. The vehicle’s registered owner must turn in their certificate of registration and both license plates. The Hokule’a plate can be renewed on an annual basis. Contact the Maui County Dept. of Motor Vehicles for more information.

Molokai has deep and long-standing connections to Hokule’a.

“Molokai has been a special home for Hokulea for several reasons,” said Nainoa Thompson, PVS president and legendary voyager. “The first is that Hokulea would make her first Hawaiian landfall at Kalaupapa when returning from Tahiti after her historic first voyage in 1976.  Since then, there has always been an outpouring of love, affection and care from the community whenever Hokulea goes to Molokai.  All the school kids come down to touch her when she is there.”

The island also has contributed many crewmembers to Hokule’a voyages.

“Over the last 46 years, Molokai has also provided extraordinary leadership in voyaging by so many crew members,” continued Thompson. “Two senior leaders in particular who have played a very large role in voyaging and training are Penny Martin, one of the first two women who sailed Hokule’a on the first voyage in 1976, and Mel Paoa who was a senior captain who provided the leadership to keep everyone safe. We recognize how special the Molokai community is and are so grateful for the tremendous care and aloha they extend to Hokule’a.”

In his role with PVS, Yamashita served as former communications manager and developed many of the merchandise branding and graphics for the organization.

The rich colors and nostalgic style of the license plate seek to capture the “timelessness” of Hokule’a’s “unbroken link to our past as well as a learning platform for our youth and their future,” said Yamashita.

“It’s finally sinking in that this is real,” he added of the plate. “I’m most proud that I am representing my children and island of Molokai through my work with the Polynesian Voyaging Society. Knowing these license plates are supporting Hokule’a and voyaging in Hawaii and throughout the Pacific — that’s something I will always be humbled by and just grateful to be a part of.”