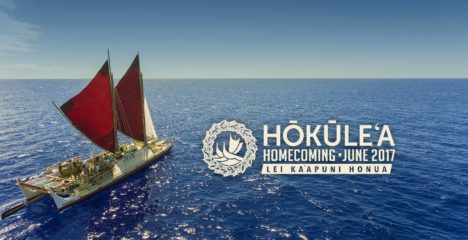 Hokule’a a photo courtesy of the Polynesian Voyaging Society

After three years traveling the world, voyaging canoe Hokule`a is headed home, with Molokai crewmember Kekama Helm joining 13 others sailing the final leg of the epic trip. They left Tahiti on May 17, and reached the halfway point on May 31. The canoe and its sister vessel Hikianalia are expected to make the historic landfall back in Hawaii on Saturday, June 17 at Oahu’s Magic Island. 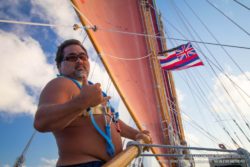 Helm is one of a handful of other Molokai watermen who have joined about 200 volunteer crewmembers from Hawaii in sailing Hokule`a around the globe over the last three years. The canoe and its crew have traveled more than 40,000 miles since leaving Oahu for the Malama Honua Worldwide Voyage in May 2014. They’ve sailed to more than 150 ports, 18 nations and eight of UNESCO’S Marine World Heritage sites with the goal of spreading a message of environmental conservation and sustainable living.

“It is the realization of decades of hard work and planning on behalf of the Polynesian Voyaging Society crew and our partners and friends around the world to embark on the final leg of Hokule`a’s voyage and return home,” said Nainoa Thompson, president of Polynesian Voyaging Society. “Watching Hokule`a crest the waves of Oahu’s south shore as she returns home, much like the canoes of our ancestors, will be a once in a lifetime experience. We are overwhelmed with emotion at all we have accomplished during this historic voyage and we look forward to setting sail on the next chapter together.”

After their return to Hawaii, Hokule`a and Hikianalia will sail around the Hawaiian Islands in the fall to reconnect with communities and schools sharing what they’ve learned on the voyage. Molokai students were among the many keiki and teachers following the Worldwide Voyage and incorporating its travels into their lesson plans.