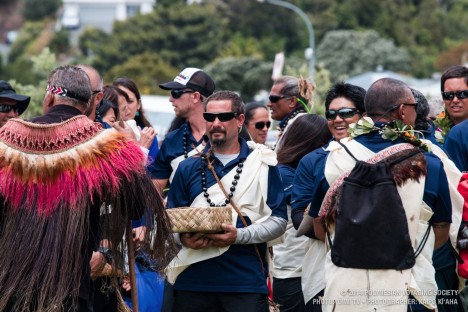 When intrepid Hokule`a crewmembers first sailed to Aotearoa 29 years ago using the traditional Polynesian art of non-instrument navigating, they reopened an ancestral route and rekindled the genealogical connection between Hawaiian and Maori. Now, Hokule`a has returned, with its sister canoe Hikianalia, carrying with her many of the original crewmembers, as well as three from Molokai.

Mel Paoa, Keoki Pescaia and Mahina Hou Ross were among the Hawaiian crewmembers that were ferried to the shoreline by paddlers of the traditional Maori waka Nga Toki Matawhaorua, and then carried ashore on the shoulders of hosting Maori tribe members of Nga Puhi.

The arrival was followed by a pōwhiri ceremony, a traditional Maori welcome consisting of performances, speeches, singing and beginning with a wero, an aggressive challenge to guests using ceremonial weapons. Following the entry of the Hawaiian contingency into Waitangi Marae, speakers honored the memories of Sir James Tau Henare, Tupinea Puriri, and Myron “Pinky” Thompson, all of whom played important roles in the resurgence of Hawaiian and Maori cultures. The top honoree of the event was living legend Hekenukumai Busby, the man largely credited for the rebirth Polynesian voyaging in Aotearoa.

“If I can empress on you anything, it’s a deep sense of gratitude… about the 30 years of helping us grow up,” said pwo (master) navigator Nainoa Thompson in honoring Busby. “You have been older brothers and sisters to us in our need to remember who we are by knowing where we come from.”

Members of the Molokai crew’s ohana also joined the celebration in Aotearoa.

The voyaging canoes departed Pago Pago, American Samoa Oct. 16 to Aotearoa and have sailed approximately 1,500 nautical miles to reach the tip of North Island. Hokule`a’s return to Aotearoa is the first visit to the country since she sailed the Voyage of Rediscovery in 1985, retracing the routes of settlement used by Polynesian ancestors. As a celebration of that rich history, this leg of the Malama Honua voyage has carried the theme, “Na Waka: A Tribe Returning Home.”