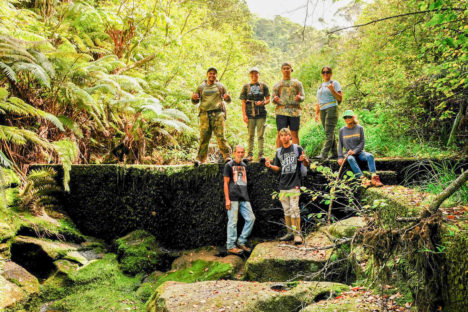 In a landmark decision last week, the state Commission on Water Resource Management unanimously ruled to restore flow levels to Kawela Stream and four others in the area, after they had been almost fully diverted for more than a century. It’s a huge victory for community members who advocated through group Molokai No Ka Heke, which filed a formal request for stream restoration in 2019.

“After over a hundred years of Kawela waters being diverted across the island and wasted, we finally said enough is enough,” said Molokai No Ka Heke member Walter Ritte.  “The big ranching and ag operations are gone, and we couldn’t just sit and watch this precious water be thrown away.”

Kawela and its neighboring streams have been diverted since the early 1900s to provide water to west Molokai, and the Mountain Water System is now owned and operated by Singapore-based Molokai Properties, known as Molokai Ranch. According to data submitted by the Ranch, along with reports from Water Commission staff, the Ranch has consistently diverted around nine times the amount of water actually used.

The Mountain Water System consists of seven diversions on various streams in the Kawela, Kaunakakai, and Waikolu hydrologic units and includes 50 million gallons in reservoir storage.

“Kawela Stream really should be fully restored, because the data shows that the Ranch doesn’t need anywhere near the amount of water it diverts,” said Lohiao Paoa of Kawela.  “We know from the Ranch’s own data that the west end’s needs can be met without taking any water from Kawela.  We thank the Commission for keeping full restoration on the table, but we know there is much more work to be done.”

Earthjustice attorney Mahesh Cleveland said the system has been allowed to fall into disrepair, and part of the Ranch’s kuleana moving forward is to fix and maintain the infrastructure. 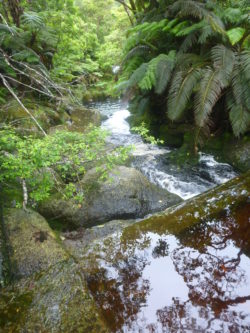 “It’s neglect, plain and simple,” he said, “and probably has a lot to do with [the Ranch] being absentee landowner with zero care to Molokai. But I think they’re seeing the writing on the wall — they can’t just waste all that water and misuse the resources that they’ve been given the privilege to use.”

In what Cleveland described as “a very powerful moment,” Commission members listened to testimony from Molokai community members, who had educated themselves on the issue, formed a grassroots movement to share information with fellow residents and presented compelling facts and mana’o.

“I want to acknowledge the young people here attending these meetings and advocating for stream restoration and a healthier community,” said Commissioner Dr. Aurora Kagawa-Viviani in a press release last week. “We have an opportunity to restore life to an area and this is moving us towards true equity.”

One important part of the ruling is establishment of five interim instream flow standards (IIFS) for the island of Molokai – baseline standards which had not previously existed. The Commission established a median flow IIFS and committed to a goal of full stream restoration of East Kawela Stream in phases.

Molokai No Ka Heke’s request for the establishment of a minimum flow standard ensures only the highest flows can be diverted. Commissioners said they aim to fully restore Kawela Stream within one year, though removal of the dam is not currently ordered, according to Cleveland.

Cleveland said the Commission will reexamine the case in six months, and in the meantime, the Ranch must come up with a long term plan for improvement and management actions to present.

“In that time, we will have identified the solutions that improve the efficiency of the system for the island overall and that’s what is really going to make it work for everybody,” said Commissioner Paul Meyer.

“It’s [the Ranch’s] responsibility to tell the Commission how they’re going to fix their mess,” continued Cleveland. “The physical process of restoration at this point is literally as simple as going up to Kawela and opening a valve.”

The Commission expects dramatic benefits to groundwater recharge, reef ecosystems and wetlands, as well as restoration of coastal spring flows that support subsistence fishing and gathering, as a result of the streamflow restoration. 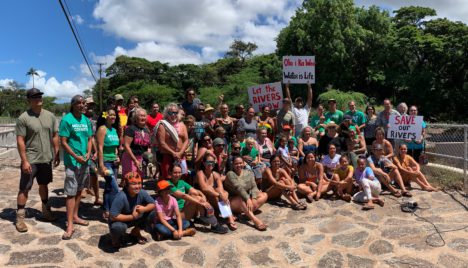 Cleveland pointed out that many residents may have never seen Kawela Stream running freely down to the ocean, in part because of the diversions and also as a result of reduced rainfall from climate change. Additionally, the hydrology of the area is such that water flows aboveground in the higher mauka region, then dives underground as it travels towards the ocean, said Cleveland. He described the Kawela aquifer as a giant underground cup that’s currently empty and needs to be refilled. While residents may not see immediate or obvious changes – for example, water flowing regularly under the Kawela Bridge – the actions being taken to restore the flow will begin to refill the cup.

“This is just one piece of the puzzle; our action isn’t going to solve all the problems with water but it’s an important piece,” said Cleveland.

“Our kupuna teach us that water is life, and that you never take more than you need of anything,” said Kawela’s Timmy Leong.  “In my lifetime, I’ve watched Kawela and the wetlands dry up, and it’s time to put the water back where it belongs.”

Three years ago, Molokai residents gathered at Kawela Bridge’s dry streambed and officially announced the petition to be filed with the Commission. Cleveland said things were quiet for a couple years, during which time commissioners gathered data from the Ranch, made site visits themselves and compiled information on the case. Over the last several months, hearings were held leading up to last week’s decision, and at its monthly meeting Tuesday, the Commission received more than 100 pieces of written testimony and hours of oral testimony.

“I first worked on forested watershed protection at Kamakou Preserve mauka of Kawela Stream in 1987, so it’s very moving now to finally take action to restore this water to Kawela Stream,” said Commission Chair Suzanne Case in the press release.

Cleveland said “the real credit for the win” goes to community members and youth.

“These guys pounded the pavement, handed out flyers, learned and then answered questions from the community. They really learned about the hydrology of the place and advocacy came from a real place of knowledge. I think the Commission saw that and responded because it was true – it was a very powerful moment. We just want to see it result in actions on the ground and water in the stream,” he said.

Calling their actions “an inspiration,” Cleveland said the victory is meaningful in more ways than one.

“What we saw here was the power of the community to take a stand to see their natural resources managed responsibly under the kuleana the state has… This is a victory for the people of Molokai, the people of Kawela and really just grassroots movements in general. They got the job done, they changed the minds of the Water Commission, it was amazing to see and it’s an inspiration for everyone.”