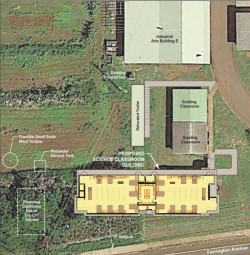 For almost 10 years, ninth through 12th graders at Molokai High have had to learn science without lab facilities.  Students must often watch video simulations instead of performing hands-on experiments, according to the Department of Education (DOE). But that may change within two years.  Molokai High School (MHS) is in the early stages of obtaining permits to build two science classrooms, scheduled for completion by the end of 2015, according to the draft Environmental Assessment (EA).

Since the separation of Molokai High and Middle schools in 2004, MHS’s approximately 340 students have conducted science education in two general purpose classrooms that lack the basic lab requirements, stated the EA. Yet despite lacking proper facilities, MHS students have continued to excel in county and state science competitions, even representing the state at national events.

“The proposed science classrooms… support the school’s and the State’s commitment to STEM education, and will ensure that the young people of Molokai are adequately prepared for college or careers after graduation,” stated the Department of Education (DOE) in the EA document.

A single structure will hold two science classroom labs and use energy-efficient design. Plans also call for a rooftop solar system as well as a 45- to 65-foot-tall wind turbine, which will result in a building with zero net energy consumption and carbon emissions, according to the EA. Another sustainable feature will include a rainwater catchment basin to support the school’s education and agriculture efforts.

“The building is proposed at the front of the campus, along Farrington Avenue,” he said. “This site was chosen in part because of its high visibility and the school’s desire to showcase our science curriculum.”

Zoning Challenges
As much as the classrooms are needed, the project is no simple undertaking.

In order to build it, the DOE is requesting zoning changes to the campus because the property is currently “split-zoned.” Most of the school is on part of the state urban district, while a portion is zoned agricultural. The planned new building would straddle the two zones, requiring two separate permits to construct. Hao said county planners recommended changing the agricultural portion to urban zoning as a long-term solution. He added that the school’s current ag programs and activities would still be permitted under the urban designation.

Because of the zoning challenges, the DOE is seeking three land use permits from the county: two will address the zoning changes, and one will amend the community plan to reflect the new designation.

Molokai Planner Ben Sticka said the EA is necessary because the project is using state funds.

Hao said the permit process will begin after the EA is complete in about a month. The Molokai Planning Commission will review all three applications before they are submitted to the County Council for approval.

Construction of the new classroom building is scheduled to begin in late 2014, and completed in about 12 months, according to the EA.

Project Concerns
While all planning commissioners and community members who spoke during last week’s meeting offered support for the classroom project, some expressed concern with the proposed wind turbine.

Community advocate Lori Buchanan said the proposal lacks an energy needs assessment to further examine the use of renewable energy and factors like bird migration patterns that may affect permitting of the wind turbine.

Commissioners agreed, requesting additional information on the wind turbine and its purpose for the project and as a learning tool.

“Nowhere in the EA did it specify exactly what wind turbines are going to be used for,” said Commissioner Zhantell Dudoit. “What does ‘educational purpose’ mean?”

She added that in light of recent controversies over the installation of commercial wind turbines on Molokai, extra care should be taken in the planning process.

“I know what a turbine is – that thing is an eye sore and noisy,” said Molokai resident Judy Caparida. “On the island, that’s what we fought about. This would open up a can of worms. If one [organization] can get them, all can get them.”

Caparida told Hao to consult the community first, while Dudoit advised notification and consultation with neighboring landowners about construction plans.

County Planning Administrator Clayton Yoshida said notifying landowners within 500 feet will be necessary at a later stage, but added that “it is advisable to reach out early in the process.”

“The wind turbine isn’t huge – it’s so kids can learn about alternative energy,” Hao said in response to the concerns.

He added afterward via email that discussion about the project has always been about studying technology and using it as a platform for student research, adding that the wind turbine is much smaller scale than used commercially.

“You never know if the exposure to these technologies will spark a student’s imagination and creativity to someday develop something even greater,” he said. “The windmill… could foster inquiry and spur innovative thinking.  What our students discover with this single tool could inform the entire community of its potential positive and negative impacts.”