Heroes Among Us: Speedy, Pineapple and Russo 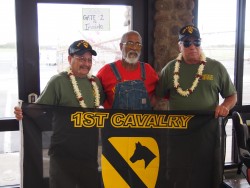 Molokai veteran Samuel Kealoha sat quietly on an airport bench on a blustery Ho`olehua morning. Lei in hand, he looked for a pair of faces out on the airstrip.

He remembered the names clearly: Melton Gonzalez, a California native. Raymond Russo, from Florida. But the faces would be different. The last time he’d seen these faces 45 years ago, they were obscured by the thick jungle foliage of Cambodia. On Feb. 14, for the first time since they left Southeast Asia, Kealoha was about to be reunited with fellow Vietnam war veterans Gonzalez and Russo, thanks to the detective-like efforts of Russo’s wife and friends.

When Gonzalez and Russo stepped into the airport, it only took a moment for the emotions to sink in. They laughed, cried and embraced with the flag of the Army’s 1st Cavalry, the unit with which they had served in together.

Kealoha would later say that he felt “deeply moved [by] the respect I got from these two guys.” For the three of them, it was like seeing long-lost relatives.

“After 40 something years … we never lost that brotherhood,” said Russo.

Four days into the reunion, Kealoha, Russo and Gonzalez sat together at Paddler’s Inn. Wearing identical Army ball caps and yellow Molokai Veterans polo shirts, they relaxed over beers and joked about each other. In a way, that was how the brotherhood all began.

In 1970 when the three were fresh out of high school and serving in the Vietnam War, they met in between field missions, hanging around camp together.

“We didn’t really get together until we came out of the bushes,” said Kealoha. “In the bushes we’re too busy looking at who the hell is our enemy.”

That’s when nicknames were born. Gonzalez was dubbed “Speedy,” after the animated Looney Tunes mouse. Russo was, simply, “Russo.” Kealoha, whose Hawaiian name nobody could remember, became “Pineapple.” However, after the war, nicknames were the challenge of tracking down buddies. Few could remember anyone’s full names.

Deb was determined to reconnect her husband with his comrades. She looked through Raymond’s military orders, combed through the white pages and online search engines. They sent letters and left phone messages. Then she got a response to a 2004 online post, and “it snowballed” from there. She and family members of other veterans found nearly 500 soldiers who served in the same company from 1964-1972.

Four years ago, the Russos connected with Gonzalez, then a couple of months ago, found Kealoha. For Russo, finding platoon friends answered a painful question he’d carried since he was medevaced out of Cambodia with malaria in 1971.

“Before his wife found me, he always thought I was dead,” Gonzalez explained. In fact, for 45 years, none of the three knew what had happened to each other.

When Kealoha, Russo and Gonzalez entered the war, the U.S. military had just invaded Cambodia and was shorthanded, so the new soldiers were thrown right into action. Helicopters carried teams out to the field to track down enemy camps, many of which were hidden underground.

“It’s three canopies: grass, bushes, trees,” explained Kealoha. “If you see fresh dirt … that’s the only way you could tell that that’s not right.”

Missions could last days, weeks, or in extreme cases, months. Once, Russo said, they spent 90 days straight in the jungle — their “clothes were rotting off us.” The three remembered camping in swamps and spending mornings burning off leeches with cigarettes.

“If we wanted to take a shower every day, we prayed to God that we’d cross a river or found a bomb crater full of water where it rained,” said Gonzalez.

For the soldiers, it felt like the enemy was always one step ahead. Despite marching hours away from the landing site to set up camp, they would come under a sudden barrage of rocket fire from distant enemy shooters. Undetected snipers pinned them down and picked off soldiers.

While they lost many friends to enemy fire, some of the greatest tragedies came at the hands of their own soldiers.

“My problem was friendly fire, more than the enemy,” Kealoha said.

Once, another company was trekking through the jungle and attempted to make a U-turn, said Gonzalez. The change in direction wasn’t communicated to the back of the company, and when the two sides spotted each other’s movements, they unknowingly began to shoot.

“They called that a free fire zone … so if you see somebody out there, you can open up on them,” explained Russo. “That’s why those accidents happened, because you [saw] movement and you can’t see who it is because of the distance.”

In 1971, Kealoha, Russo and Gonzalez all left Cambodia.

Once Kealoha got back to the U.S., he tried to pick up life where he’d left off. Before Cambodia he’d done a semester of college, so he decided to attend Missouri Southern State University, where he studied political science but was kicked out of school after getting into a fight with a police officer.

For Gonzalez, California wasn’t how he remembered it.

“When we hit the main streets of Oakland, I thought it was a lot uglier than Vietnam itself,” said Gonzalez. “I was never spitted on until I got there. I was called a baby killer.”

Like Kealoha, Gonzalez struggled to reenter daily life. He got a white-collar office job and only lasted a week.

“I wasn’t used to having people walk up behind me,” he said. “I had one supervisor walk up behind me one time and ask me a question. I turned around, grabbed him by the throat and I was gonna stab him. A bunch of guys grabbed me. … I started shaking and dropped the object, and I walked out and I never went back.”

Meanwhile, the physical effects of Vietnam caught up to Russo.  He experienced skin rashes that he attributed to the infamous Agent Orange, a mix of herbicides that the military sprayed to destroy foliage in the South Pacific jungles.

“To this day, I still have lotion. I get skin rashes,” said Russo. “I have the Type 2 diabetes. … I have ischemic heart condition, which is caused from Agent Orange. But that’s only recently that the VA’s taken care of me.” 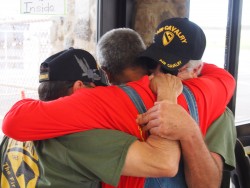 “We cried like babies,” said Gonzalez of their emotional reunion. Photo by Catherine Cluett.

However, in Cambodia, the goal was just to get home alive. Now, they’ve lived long enough to be sharing beers on a small island together. Vietnam veterans, said Deb, are dying off 400 a day, which is why reunions like these are so important for them.

“I think as these Vietnam veterans get together it seems like therapy for them, talking about the war, and some fun times as a youth,” she said. “… A lot of it has to do with the wives just having the desire to see these guys together.”

After they connected with April, Samuel’s wife, a couple of months ago, the Gonzalez and Russo families decided to bring the reunion to Kealoha on Molokai.

“They have the utmost respect for each other,” said Deb of the veterans. “[It’s] amazing 45 years has passed and seems like it was last week for many of them.”

This story is part of a Dispatch series called Heroes Among Us, to honor the island’s veterans, their personal histories and contributions. Each article will feature a profile of one of Molokai’s war veterans. If you know a veteran you’d like to see featured in this series or would like to share your own story, please contact us at 552-2781 or editor@themolokaidispatch.com.

One Response to “Heroes Among Us: Speedy, Pineapple and Russo”