Heroes Among Us: Samuel Makaiwi

The Dispatch is starting a new series called Heroes Among Us, to honor the island’s veterans, their personal histories and contributions. Each article will feature a profile of one of Molokai’s war veterans. If you know a veteran you’d like to see featured in this series or would like to share your own story, please contact us at 552-2781 or editor@themolokaidispatch.com.

Like many American dads, Samuel Makaiwi spent Father’s Day 2005 with his son. But instead of celebrating it in an aloha shirt at the nearest breakfast joint, he spent it in uniform at a dusty U.S. Army post in Baghdad, Iraq, where both he and his son Tadd were stationed.

At 55, Makaiwi could’ve been retired. Instead, he was fighting a war alongside his son.

“We were celebrities,” Makaiwi said with a laugh, pointing to a framed newspaper clipping of himself and Tadd in Baghdad. “… Everybody wanted our pictures for papers.” 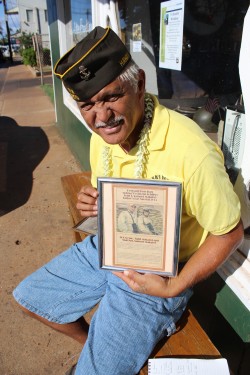 Sam Makaiwi shows a newspaper clipping of himself and his son Tadd. Photo by Colleen Uechi.

But Makaiwi understood that being deployed with his son meant more than just a photo op. For him, it meant an extra dose of caution. When returning from missions, he looked first for Tadd.

“I make sure when I’m going out on my mission, he’s coming in,” Makaiwi said. “I don’t leave until he comes in. … Knowing that my son’s safe, I can really focus on my mission.”

Although he’d already been in the military for over 30 years, it was the first time Makaiwi had been deployed abroad.

Born and raised on Molokai, Makaiwi grew up milking cows and harvesting vegetables on the family farm. He later moved to Oahu to attend Campbell High School, where he met his wife Darlene. The two were married on May 11, 1970. The next day, the 20-year-old Makaiwi was drafted into the military. He and Darlene never got a honeymoon before he was sent to California for training.

Although the Vietnam War was raging, he was never deployed to the South Pacific, and within a few years he was able to return to Molokai and joined the National Guard in 1974. After 30 years and three kids, Makaiwi was deployed to Iraq, along with his only son Tadd. Although Darlene said the Makaiwi boys “looked out for each other,” having a son and a husband deployed was difficult.

The war on terror in the Middle East was a different kind of war, Makaiwi said. Before, enemies were more easily distinguished. In Iraq, terrorists were hidden amongst civilians. Over a course of 1,800 missions, Makaiwi went into countless villages, searching for enemies that looked like just the opposite.

Makaiwi’s missions took him along a six-mile stretch of road known as “Route Irish,” one of the deadliest routes in the Baghdad area. He did eight patrols a day, clearing routes, checking villages and recovering fellow troops in trouble as part of a quick-reaction force (QRF). When a soldier radioed in for help, Makaiwi said, they had just minutes to plot the location and arrive on the scene.

“If you recover anyone [in] over 10 minutes, consider them dead,” said Makaiwi, who became so good at his job over two years of deployment that he was awarded for being the “fastest QRF to recover.”

These days, the man who was once the U.S. Army’s quickest recovering soldier is retired from the military and enjoying what he calls “Molokai living” again, back home with Darlene. His daughters Tes and Ui live on island and Tadd is a ferry ride away on Maui. Makaiwi speaks animatedly of his experiences in the army, but admits somberly that the events of the battlefield have an even bigger impact on him now that he’s home.

“You don’t feel it when you’re there. You just do what you gotta do,” he said. “… But when you come home, then I get time to think about it. That’s when it hits. It hits you hard.”

Makaiwi added he also thinks often of the brave men and women he fought with.