Heroes Among Us: Michael Helm

For a long time, Michael Helm wasn’t proud to be a veteran, but it was a feeling he kept to himself.

Helm grew up on Molokai as the son of beloved island veteran, the late Larry Helm, who served in Vietnam and was heavily involved in veterans’ affairs on Molokai. 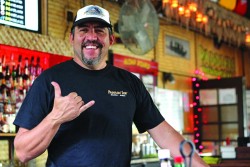 “It was kinda hard ‘cause my dad was really proud I went in, and I wasn’t really proud coming out [of the military],” said Michael. “I never did get a chance to tell him about that.”

Michael was never deployed to a war. However, like many veterans, during his service he was deeply impacted by the culture and system of the military, which he grew to distrust.

Michael joined the Army in 1986 after a year at Chaminade University. He spent much of his time training to operate the Army’s new M1A1 tanks, cramming his 6’4” former basketball player’s frame into a tank with three other soldiers.

For him, the machines were a thrill to operate, and he relished the camaraderie he shared with fellow soldiers as they rumbled through training exercises. However, what eclipsed his excitement was the lack of responsibility he said he saw within the military.

He remembered seeing a fellow soldier killed during a training exercise, a tragic experience that troubled him most because they “weren’t even at war.”

“I couldn’t believe they’d be so irresponsible,” said Michael, not wanting to share details of the incident. “That happens a lot in the military, a lot of accidents.”

He also remembered the indifference his superiors showed towards a mentally challenged man during basic training in Kentucky. The man was the brunt of beatings within the platoon. When Michael asked his drill sergeants to discharge the man from service, they simply told Michael, the platoon leader, to look out for him. On graduation day, they sent the man through several hours of extra, unwarranted physical training, then kicked him out.

The situation outraged Michael, who grew up the oldest of five siblings. He was the guy who took on bullies. He scrapped with schoolmates who gave him trouble for his “lighter skin.” He served as “the protector” of a mentally challenged neighborhood kid, remembered his mother, Barbara Helm.

“As the oldest, he shared the concerns … and the ups and the downs with his siblings,” she said. “That was probably a training ground on how to be considerate and care about other people.”

Angry with what he’d seen, Michael “drank a lot of my military career away just to numb it” and tried to concentrate on the experiences with his fellow soldiers.

He participated in a military exercise known as REFORGER, short for the “return of forces to Germany,” in which Americans joined European forces in the German countryside for mock war scenarios. Abroad, he befriended French, German and English soldiers. Throughout his time in the military, he turned strangers into friends. Ultimately, he said, it was the people who helped him stay sane.

“I would bring them all together and they had to get along, and they did,” he said, laughing. “I was doing that all the time. I enjoy bringing the world together.”

Twenty-five years later, his military experiences are just starting to surface, with the help of counseling. His mother, Barbara, and his girlfriend Lauren Kikukawa explained that the family is hearing many of these stories for the first time. Because despite his frustrations, Michael said he’s not the kind of guy that wants “to make waves.” He prefers his unassuming job as bar manager at Paddler’s Inn, where he gets to serve ice cold beers and hearty laughter to customers.

“As we start talking about it, and especially after he’s been through counseling, we can make connections to stuff, [why] he reacts to certain situations this way,” said Kikukawa, a literacy support specialist. “The military is so different. It takes a lot to just understand what they’ve experienced.”

Kikukawa said she’s still learning how the repercussions of his past experiences have shaped him.

“A good veteran has a real strong woman behind him,” said Michael. He said his mom was that for his dad when Larry returned from Vietnam, and now Kikukawa is that for him.

Ultimately, it was his father who taught him to be proud to be a veteran.

“He made me understand that all the politics had nothing to do with the camaraderie,” said Michael. “That’s your family. It’s all about making sure everyone gets home safe.”

And like his dad, Michael has tried to do his part for island veterans. When Larry got cancer, Michael, Kikukawa and Paddler’s owner Jerry Johnson launched a fundraiser to finish the veterans’ center that’s been in construction since 2006. They raised $25,000, but soon after, Larry passed away with the building still nearing completion.

Michael said it’s difficult to continue his involvement, as he and Kikukawa are busy with jobs and four kids. He said he’s grateful to the veterans for “making one of my dad’s dreams come true,” and especially thanked Lazlo Toth, Danny Iaea and John “Longie” Dudoit and his wife Lorna.

Michael said he has also come to embrace his role as a soldier in the purest sense of the word.

“The Veterans Center is not just for veterans, it’s for the community,” he said. “As soldiers, that’s what your job is, to take care of and protect your community. What a better way to do it than by sharing the Veterans Center? … That’s the way my dad looked at it.”

This story is part of a new Dispatch series called Heroes Among Us, to honor the island’s veterans, their personal histories and contributions. Each article will feature a profile of one of Molokai’s war veterans. If you know a veteran you’d like to see featured in this series or would like to share your own story, please contact us at 552-2781 or editor@themolokaidispatch.com.