Heroes Among Us: John “Longie” Dudoit

Forty years after he left the Army, Vietnam veteran John “Longie” Dudoit can rattle off his military identification number without hesitation.

Because even though are some memories Dudoit would like to forget as a veteran of one of the most controversial wars in American history, these memories, like his military number, are seared into his mind.

It was the photographs that first drew Dudoit into the Vietnam conflict. Wanting to know if the war pictures he’d seen were true, he joined the Army fresh out of Molokai High School and was deployed to Vietnam in 1968. It turned out to be worse than he’d expected. 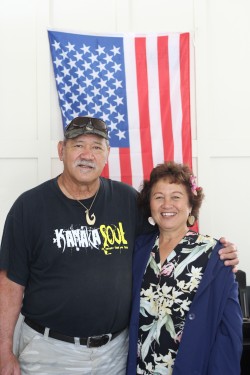 Dudoit and his platoon traveled upriver in the Navy’s tango boats, jumping onshore for “search and destroy” missions that sometimes lasted several days. He slogged through the rice paddies of Kien Hoa province with the Army’s 9th Division, looking for enemy targets that military intelligence had picked up.

As an infantryman, Dudoit said he was sent to the front lines. During patrols, they often came under fire. He saw fellow soldiers shot through the head by snipers’ bullets. He dragged wounded comrades through canals under a hail of bullets. He and his platoon lived with the overhanging threat of Napalm and Agent Orange, a toxic mix of chemicals the U.S. used to destroy jungle foliage in Vietnam that left both soldiers and civilians alike with severe deformities.

“Sometimes when we were setting up at night, people would shoot, and then you hear moanings in the night time,” Longie recalled. “You wonder what the hell is happening. [You] cannot wait to get out of there.”

When he could, he sent letters home to his high school sweetheart Lorna, whom he’d met during their junior year at Molokai High School. Lorna was studying liberal arts at Maunaolu College in Paia. She remembers not knowing much about the war, since the media coverage during that time had to do more with protests rather than the war itself.

“I really wasn’t aware of what was going on until he got back,” she said. “Then he started talking to me about … what happened.”

Less than a month before he was to leave Vietnam, Longie was doing security checks on a bridge when passing motorcyclists shot him through the wrist. He was medevaced to Saigon, where he recuperated in a hospital with a fellow soldier who’d been burned head-to-toe by Napalm. When the military offered Longie $5,000 to return to the service, he turned them down. He’d seen enough.

The Battle Back Home

Back on Molokai, Longie and Lorna were married in May 1970. However, other aspects of transitioning to civilian life turned out to be “like fighting another war,” as Longie said.

Many professionals at the time failed to monitor the physical and mental health of returning veterans, so like many others, Longie had to face the effects of war alone. According to the U.S. Department of Health and Human Services, post-traumatic stress disorder (PTSD) wasn’t officially recognized until 1980. Lorna convinced her husband to see a counselor from the VA, but the counselor didn’t see the need.

“[She asked], ‘What are you here for? ‘What do you want?’” Lorna said, remembering the counselor’s hostile attitude. “I don’t think she even realized what they went through.”

After that, Longie said he tried to close off that part of his life. He stopped talking about his experiences and refused to see fellow veterans. He said he often turned to fighting and drinking to drown out the gunshots and helicopters he heard in his nightmares.

But, as Lorna explained, “the key was to keep busy,” and before long, the Dudoits were occupied with kids and jobs. While Lorna worked in the tax office, Longie did construction, a job that allowed him to vent some of his frustrations

“Instead of pounding people, I was pounding dirt with the machine,” he joked.

When counselors finally started to visit Molokai in the late 90s, Longie began seeing Dr. Kathleen McNamara and was diagnosed as a “100 percent PTSD disabled veteran,” which means he gets the maximum amount of compensation payments that veterans can receive from the government. While he said he’s still bothered by the occasional memory, he’s taking the doctor’s calming mental exercises to heart.

“For the rest of my life, it’s gonna be there, but to learn how to control it, that’s the main thing,” Longie said. “Dr. Mac was like the breaking point for me. … That’s why I can kinda just talk about it a little bit. Before, no way.”

Now, the Dudoits are both heavily involved in veterans’ affairs on Molokai. Longie serves as vice commander for Molokai Veterans Caring for Veterans (MVCV) and has arranged for psychologists to visit the island. Both are helping finalize construction on a new center for MVCV. The center, which they hope will be completed this year, will include private offices for counseling.

“I think it was our calling then, to suffer at the start,” said Longie. “We look back at all the struggles … and now we sit back on our porch and we look at each other and say …”

“A lot to be thankful for,” said Lorna, finishing her husband’s sentence. Whether it’s facing painful memories or helping others to do the same, Lorna and Longie have a habit of tackling everything together.

This story is part of a new Dispatch series called Heroes Among Us, to honor the island’s veterans, their personal histories and contributions. Each article will feature a profile of one of Molokai’s war veterans. If you know a veteran you’d like to see featured in this series or would like to share your own story, please contact us at 552-2781 or editor@themolokaidispatch.com.