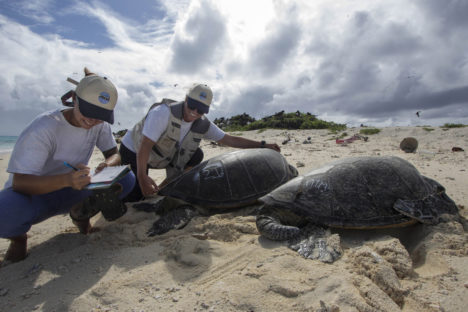 Have you spotted a green sea turtle lately? NOAA is asking everyone on Molokai to report sea turtles with numbers on their shells for our Hono Count 2018.

Since April, an intrepid team of NOAA biologists has been up in the Northwestern Hawaiian Islands, marking of all the endangered green sea turtles that are nesting or basking. Anytime now, those turtles will return to the main Hawaiian Islands. We are asking residents and visitors to help us find and identify them. Molokai volunteers monitor nesting and stranded turtles throughout the year, but this would be the first time the island has participated in the Honu Count.

Last year, we asked citizen scientists to report all of their encounters with turtles that had numbers on their shells. Tracking these numbers helps us understand green sea turtle foraging habitats, migration, and distribution. Citizen scientists provided 70 reports of 23 numbered females and nine males sighted around the main Hawaiian Islands for Honu Count 2017. Adult turtles were seen in foraging habitats of Maui, Oahu, Kauai and Hawaii Island last year, and we are looking for Molokai sightings this year.

Biologists etch a temporary number on turtles during the summer field survey. The number can last up to a year and makes it easy to identify each individual turtle. If you see a turtle with a number on its shell:
1. Keep a respectful distance of 10 feet (3 meters).
2. Take a photo (without disturbing the turtle).
3. Record the location (for example name of beach/body of water, dropped pin, or GPS coordinates).
4. Email NOAA to report the turtle’s number and location: RespectWildlife@noaa.gov
5. After you email RespectWildlife@noaa.gov, post your photo on social media with #HonuCount2018 and spread the word!