He’e and Mahina Malama the Ocean in New Book 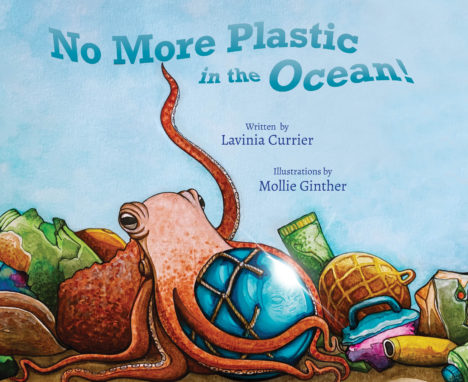 A new children’s book written on Molokai uses poignant rhymes, beautiful illustrations, Hawaiian culture and a little bit of magic to help keiki find a solution to marine debris and plastic pollution. “No More Plastic in the Ocean!” written by Lavinia Currier, steward and one of the family owners of Pu’u O Hoku Ranch, was inspired by spending many mornings on Halawa Beach with her grandson, picking up trash washed up on the shoreline.

“As Many people on Molokai noticed, the amount of plastic washing up on the beach was increasing about 10 years ago… we started seeing a lot of industrial and fishing plastics,” said Currier. “At the Ranch, we started doing cleanups on accessible coastlines, including Halawa, in coordination with Sustainable Coastlines and The Nature Conservancy and other groups. We found the quantity [of marine debris] was so great that you had to bag it and have those organizations come pick up with a helicopter… There’s been a tremendous increase in quantity.”

Currier, a filmmaker and conservationist who splits her time between living on Molokai and the mainland, was increasingly concerned for the health of the environment. She said on a small island, “everything that happens to us happens on a more dramatic scale because we can’t ignore those problems as an island culture.”

“We’re finite, we’re smaller, we’re going to see the plastic on the beach but not have anywhere to put it. We see the truly crippling effect on marine mammals. So this issue is pretty real for us,” she said.

“When I had a grandchild and was still picking up plastic two years ago, I thought it would be nice to write a book that didn’t make children feel responsible but alerted them to the problem,” Currier explained.

In “No More Plastic in the Ocean!” He’e the octopus is sad because her ocean is filling up with plastic trash. She asks her friend Mahina to do something. Mahina uses her magnetic magic to pull the trash up out of the ocean and drop it back in the city. But humans don’t like the trash either. In the end, they all work together to find a solution to malama the ocean and reduce the use of plastic.

“It’s a delicate balance for children not to upset them about problems they’re not responsible for, to make it happy, but not diminish the problem,” she said. “I approached it through magic and animal characters, myths and elements of Hawaiian culture that talk about taking care and protecting those elements that are so special on the island.”

The story is accompanied by colorful and evocative watercolor illustrations by Mollie Ginther, who has also lived on Molokai, Currier said. Most of the writing and illustrations took shape during the month of February last year, when Ginther was spending some time on the island before leaving for Palmira.

Currier said she asked Ginther about joining her to illustrate the book and “she did it very quickly.”

Currier even got beach-side reviews of the book as she was writing it.

“The children at the Ranch came down to the beach and looked at it and gave it their critiques,” she laughed about the kids telling her the parts they didn’t like. “They were really helpful!”

Currier has written screenplays and poetry but said this was her first children’s book and already has plans for more. She wanted to keep publication local and worked with Mutual Publishing in Honolulu to produce the book, which became available in December. “No More Plastic in the Ocean!” can be ordered online at mutualpublishing.com and at the Pu’u O Hoku Ranch store, online at puuohokustore.com, where it can be shipped locally, or in person on Molokai’s east end. Profits from the book will be donated to organizations that fight plastic in the ocean.

Currier said she hopes by reading her book, children “realize how lucky they are to be surrounded by such beauty and fairly pristine ocean water – we just have to make sure we keep it that way!”