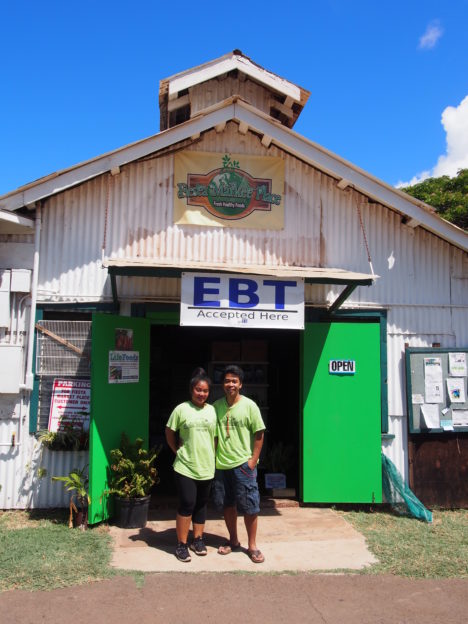 For Marcy and Zhander Fiesta, hard work has made a dream come true in the form of newly-opened Fiesta Market Place, where Outpost Natural Foods was formerly located. They’ve completed a renovation impossible mission, revamped a locally-focused menu and are building an eco-friendly business they hope will grow into the future.

With a lunch counter offering options for both vegetarian and meat-eaters, as well as smoothies, health food retail products, local produce and frozen desserts, Fiesta Market Place is off to a running start since the couple acquired the business in January.

“The menu that we have in our kitchen right now, it’s pretty much 100 percent local, from the seasoning, from the shrimp to the steak to the salad,” said Zhander. “That’s what we want to emphasize. That makes us different from the rest. The priority is local, if we can get Molokai products, we get it. So far, it’s been tremendously successful.”

In addition to a Molokai grass-fed beef and Keawa Nui shrimp plate, veggie burgers made on Maui and topped with probiotic, Maui-created dressings are a staple on the menu, along with spinach spicy veggie crumble wrap. The Fiestas said more daily specials as well as Filipino cuisine will be coming soon. With each meal cooked homestyle and made to order, they suggest calling ahead to order if you’re in a rush. 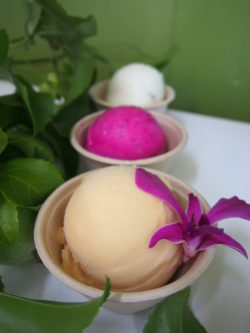 Sorbetto — a frozen fruit-based, dairy- and gluten-free dessert — is available in a myriad of refreshing flavors. Bright pink dragon fruit, tangy sweet lilikoi, honeydew, lychee and strawberry lemonade are just a few. Gelato, a frozen Italian dessert, is also served in a variety of flavors. Made to order smoothies are customizable, blended with up to four fresh fruits and a splash of water.

Jar ‘n Salad is an eco-friendly option made from local produce in a grab and go glass jar. Return the empty jar afterward and get $1 off your next purchase.

After a visit to the landfill to learn that it’s already filled up, they’ve turned to biodegradable options for eating utensils and are offering reusable containers like jars that won’t get thrown away.

Both growing up in hard-working, business-minded families — Zhander on Maui and Marcy (Kanemitsu) on Molokai, they’re raising their eight children — ages 2 to 15 — to also learn the importance of going the extra mile.

Both Zhander and Marcy previously worked in sales, marketing and management. Zhander worked as a sous-chef at the Hyatt Regency Resort on Maui. When they moved to Molokai in 2013, people told them they were crazy because “there’re no jobs there,” they said. “But we wanted to create a job.”

With a growing family and a health-conscious lifestyle, they said they found it hard to always find reliable produce on Molokai. Zhander’s family had a farmer’s market business on Maui; so, starting with a small table of produce at the Kaunakakai Saturday market, they laid the groundwork of what would become Fiesta Market Place. Using connections statewide, they brought in fruits and vegetables as well as Molokai-grown produce.

“We were approached about the former Outpost and took the opportunity,” said Zhander of the shift early this year. “It was a big investment and commitment … but you can call it a dream for us.”

The Fiestas said they wanted to continue what Outpost had established, but with their own twist. One thing they wanted to keep was the friendly vibe and passion to go above and beyond for customers.

“The most rewarding feeling is helping someone,” said Zhander. “We have customers come in and say, ‘I need help, I don’t know what to do.’ [People say] ‘my doctor told me to come here.’ We help them with their health, based on their doctor’s recommendations. If we don’t have it in here, we can get it.”

Bringing healthy meals to Molokai has been an arduous journey. With updated health codes and an aging building, the Fiestas had to bring in new kitchen equipment, update plumbing and electrical, and do a general overhaul of the store interior.

“Eight months of planning and renovations were squeezed into 19 days,” recalled Zhander. “Family and friends worked day and night to help us meet [Department of Health] inspection deadlines.”

With a clean bill of health, the Fiestas said much more is yet to come. Making freshly made cold-pressed juices, expanding retail products, bringing on employees, and adding a covered seating area in the back with a dinner ambiance for future meal expansion are just a few of their plans. They already offer free WiFi, as well as catering services.

“Anybody that puts in that amount of time, commitment and hard work into it, eventually it will prosper, with God’s grace,” said Zhander. “We just ask for the support from the community.”

To contact Fiesta Market Place, located near Fish and Dive in Kaunakakai, call them at 553-5661.