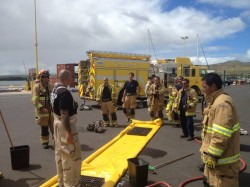 For Kimo Puailihau, giving back to Molokai means helping his home island better prepare for a potential hazardous materials emergency.

Puailihau — a 2001 Molokai High School graduate — has returned annually to Molokai for the past five years as a training coordinator with the 93rd Civil Support Team (CST) of the Hawaii National Guard. His team helps Molokai’s first responders get ready for the worst-case “what if” scenarios involving hazardous materials.

Whether the threat is chemical, biological or radiological, Puailihau and his team are ready to respond. When a strange chemical or other unknown material is found, first responders on Molokai will call the Hazmat 10 Team on Maui. They are trained to respond to the common, everyday hazmat situations. But when the stakes are higher, it is the 93rd CST who get the call.

Puailihau said Molokai firefighters are pretty well prepared in defensive operations if a high level hazmat situation occurs. His training takes first responders to the next level to be more “proactive” in handling emergencies, said Puailihau. This can involve establishing isolation zones and how to collect samples of materials for identification. And this type of preparation allows resident to feel more secure, he added.

“Just because you hear about hazardous materials or radiation doesn’t mean you need to be afraid,” Puailihau said. “I just want to let the people at home to know that what we are doing is stuff that will benefit Molokai.”

When Puailihau joined the 93rd CST in 2007, these types of hazmat training sessions were limited to the main Hawaiian Islands. At his urging, the team now conducts training exercises on Molokai and Lanai annually.

“My whole thing is to bring something back home,” he said. 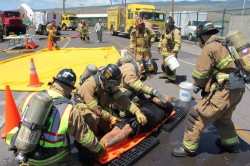 This year’s training scenario involves the hypothetical release of anthrax into an air conditioning system. Two weeks ago on Molokai, the training took place at the Young Brothers’ shipping site at the Kaunakakai Wharf. In the unlikely event that an attack were to occur on Molokai, the Kaunakakai Harbor and the Molokai Airport are considered the “highest value targets,” said Puailihau.

When first responders arrived at the training scene, they found a man passed out on the ground. Puailihau trained the firefighters what to look for before reacting and treating it as a medical response.

He taught them to examine the surrounding environment for warning signs. Are there any unusual smells? Does the plant or animal life appear different than normal? Is anything else out of the ordinary?

Molokai does have a hazmat technician on duty at all times at the fire station. But to be better prepared, Puailihau said the island could use more certified technicians, as well as more equipment, including a better decontamination setup and detectors for threats. He said he would like to see more of this equipment come from Maui but realizes that these decisions come down to money which is not always available.

“The fire department is now not just being reactive but can be proactive to threats,” said Puailihau.