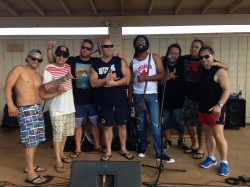 Katchafire stands with Paulele Alcon, second from the right, before the show. Photo by Bianca Moragne.

Hawaii’s Finest Clothing has come a long way since its humble beginnings on Molokai. For Paulele Alcon, what began as a T-shirt for his cousin’s bachelor party turned into one of the most successful local clothing businesses in the state, he said. With two retail locations under his belt, Alcon decided to give thanks to the community that supported him all along.

To celebrate a milestone of five years in business, Alcon returned to Molokai, the birthplace of both himself and his company. He hosted a free anniversary concert at One Alii Park Friday night featuring Molokai’s Roots Mafia, Just Cuz,  Melia Kalawe and Katchafire, the band that played at Hawaii’s Finest first concert.

“[The Molokai community has] been supportive since day one before I found success,” Alcon said.

New Zealand’s Katchafire kicked off their first show in the U.S. on Molokai in 2007, said drummer Jordan Bell.

“We love coming back here every time,” Bell said. “Not too many bands get to come out here and experience the island like we get to on a local level. The experience, the vibe and aloha from the locals here is humble.”

Alcon supports local artists and gives them a platform to express their music, Bell said.

“I give props to people like Paulele who’s behind the local musicians and promoting them as well as giving back to the Molokai people and community,” Bell said. “I really look up to him for that.”

Leon Davey, Katchafire vocalist and percussionist, said he loves coming back to Molokai and working with Alcon.

“Molokai is quiet, peaceful and a totally difference scene than Oahu,” Davey said. “One word to explain Alcon is hardworking. He works hard and he’s reliable. He’s been tight from day one and we’ll definitely be working with him a lot more in the future.”

Instead of spending money on advertising and marketing Alcon gives free gear to artists, he said.

“We go straight to the store and grab whatever we want for the tour: T-shirts, hats and socks,” said guitarist Gee Bell. “We wear Hawaii’s Finest in the mainland and also in Australia and New Zealand to spread it around.”

In the past, Katchafire’s concerts on Molokai have been for ages 21 and up, but when Alcon lined up Friday’s concert he wanted it to be open to everyone, he said. Sales at his store in Kaunakaki almost match sales at the Oahu store, and because of this support, Alcon hosted a family event. Friday’s concert brought a large turnout with young and old alike crowding the stage and dancing late into the evening.

“I always wanted my five-year anniversary to be special,” Alcon said. “The one thing about Molokai is their support has been crazy. Without Molokai over the years I know for a fact that we wouldn’t be afloat so this is giving back.”