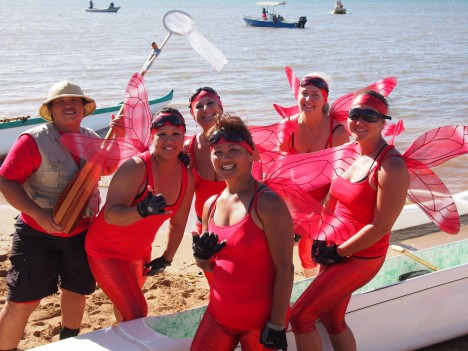 Pirates, dragonflies, clowns and cats all made an appearance at last Saturday’s Molokai Master Blasters, the annual canoe race for the young at heart that involves paddling, drinking and dressing in costume. Pictured here are the Pinao-`ula, or dragonflies, of Molokai, which were among 17 teams from the island and around the state this year. The event – the only one of its kind — is held as a fundraiser for the Molokai Canoe Club.

Each team is made up of six men, age 40 and up for a total crew age of 300 years minimum, or six women, 35 and up totaling at least 250 in age. The race starts from Kawela Rice Patch and ends at Kaunakakai Wharf. The six-mile course is interrupted by four stops at which teams must jump ashore to chug beers then jump back and keep paddling.

Many participants train for weeks in advance for the friendly competition, and winners are claimed for not only the fastest times but also the best-dressed.