Hanging Up the Badge 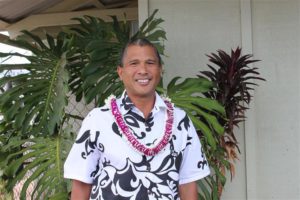 The community thanks Sgt. Detective Eugene Santiago for his 30 years of service with the Maui PD.

After 30 years of service with the Maui Police Department — 28 of which were served here in Molokai –Sergeant Detective Eugene Santiago is retiring. Since his promotion to Sergeant in February of 1998, one of Santiago’s highest priorities has been his commitment to the community.

“Detective Santiago is one of the most genuinely nice people I know,” said Lieutenant Clyde Holokai.  “He is one guy I’ve never seen let the job get to him in a negative way.”

Not only did Santiago win the respect of his peers in the department, but also earned recognition for his service on a broader level. He won Molokai County Employee of the year twice –once in 1995 and again in 2008.

As a detective, Santiago said he participated in a lot of training on- and off-island to become the best he could be in his field – a field he describes as “like a ministry.” Santiago said he actively sought those training opportunities, including state-wide seminars from homicide, crime prevention and hostage negotiation to communication and team building.

“On Molokai, you cannot wait for [training] to fall into your lap,” he said.  “You need to seek the training, do your research and be aggressive.”

“Detective Santiago is always looking at ways to improve himself as an investigator, supervisor, manager and leader,” wrote former MPD Captain Jody Singsank.  “It is obvious that [he] cares deeply about the people of Molokai and what happens in the community.”

“[Sergeant Detective Eugene Santiago] was best known for his compassion and aloha spirit that comforted the new officers who were…assigned to the Molokai Police District,” wrote MPD Chief Gary Yabuta.  “[He] gave an endless amount of shirts off his back for his fellow officers.”

Despite his accolades, the sergeant remains humble. Santiago said that he himself was motivated to join the police force largely because of the positive police presence in his hometown of Maunaloa while he was growing up.  “They were very visible in a small plantation village,” he said.  “I wanted to also give back and serve the community.”

“There are high expectations for the police to be able to solve a lot of people’s problems,” he said.  “But as a community, if we partner together, we can get more done.”

The partnership Santiago imagines is one in which the community takes a proactive stance in reporting crime and communicating with police officers, instead of a “see-no-evil-hear-no-evil” mentality..  At the same time, he urges police officers to be more approachable, accessible, visible, and responsive to community concerns.

“What I’d like to see is the police and community forming bridges and building strong community ties with each other,” he said.

Santiago said he tried to put aside the “macho” police attitude allowing his sense of humor to show through, even on the job. While he isn’t quick to boast stories of his work as a detective, Santiago still laughs when he talks about the time he wrestled with a deer that had ran into his patrol car. He admitted to using handcuffs to subdue animal but in the end, the deer was the one that got away.

But Santiago took his job seriously and recognizes that there is still a lot of work to be done, especially in light of recent crimes on the island.  He stresses the importance of police officers being informed and also passing on that information to the community.

“He had the longest briefing sessions…as he would drop pop quizzes and scenarios on us all the time trying to keep our minds thinking,” said Community Police Officer Lonnie Ka`ai.  “He will definitely be missed.”

When asked what is next for the young retiree, the detective laughed.

“It really hasn’t sunk in yet,” he said.  “I’ve never been retired before.”

Santiago would like to thank the community for its friendship and support.

“I’d like to especially thank my wife Erlinda, and sons Matthew, Isaiah, and Luke for their unwavering support and understanding, and their unconditional love, for allowing me the opportunity to serve the community I love. I love you all very much…and I love you very much, Molokai!”

Replacing Santiago as detective will be Sergeant Jamie Winfrey who has been with the department for 19 years, effective April 2.

One Response to “Hanging Up the Badge”