Life in Maunaloa has not been easy for the past couple years.  The unexpected closure of Molokai Ranch was followed by the boarding up of many of the town’s biggest businesses. Now, Maunaloa’s community members are digging in their heels to try to save their most important remaining resource – their school.

“Our school is the heartbeat of our community,” said sixth grade teacher Wendy Espaniola. “[Losing it] would make a major impact on our community, it would shut us down.” 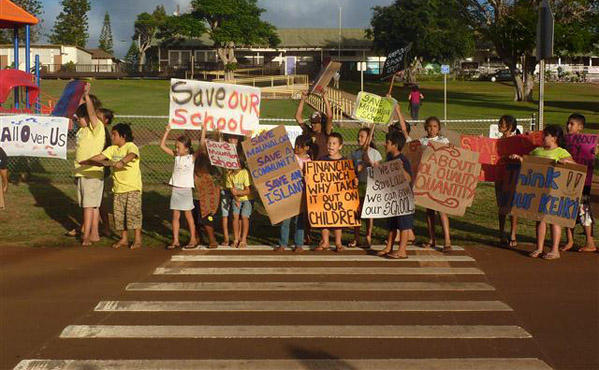 Espaniola is one of 10 community members and educators who were selected to be on the Maunaloa Consolidation Task Force. The task force was formed to evaluate the future of Maunaloa Elementary School. Their job is to present the Board of Education (BOE) with a detailed report of the school and also recommend whether or not it should remain open.

Maunaloa Elementary School is one of approximately 20 schools across the state that is being considered for consolidation by the BOE. The state is threatening to Muanaloa students to another school on Molokai and closing the building. Randy Moore, the Department of Education’s assistant superintendent, said there is a list of criteria that the BOE uses to determine if a school should be considered for consolidation.

According to Moore, schools are required to go through with a consolidation study if: one-third of classroom space is in excess of what the school needs, more than one-third of school facilities do not meet current standards or the school is in danger of becoming so small that it will not offer the range of educational opportunities available at other schools. Maunaloa’s facilities are up to par, but with only roughly 60 students, the school’s small size raised red flags for the BOE.

These rules have been on the books for several years. However, the recent state budget cut has pushed the Board to move much more quickly on the consolidation studies. One school, located in Wailupe, Oahu, has already been consolidated and four other locations (including Maunaloa) are in the beginning stages of the investigation.

“The state financial crisis has certainly accelerated the process,” Moore said. “To operate a school like Maunaloa is probably more than double the cost per student of the average school.”

Just Getting Started
Last week the task force met for the second time at the school’s cafeteria. They presented data about the school and accepted public testimony from community members. The data and testimonies will eventually be used in their report to the BOE, which will be delivered this spring.

According to Moore, the process for Oahu’s Wailupe School took approximately five months to finish. He said the Maunaloa decision is more complicated because of its broader implications to the community, and he expects it to take much longer.

Save Our School
Maunaloa made it on to the BOE’s consolidation list because of its small student body, but in the eyes of the community the school’s size is its greatest asset.

The school averages 10.5 students per teacher. While budget cuts have led to combining grades for certain subjects and a lack of counselors, parents say that small ratio provides an invaluable relationship between the teacher and students.

“My kids love the school because it is small and they learn more than they would in a bigger school,” said Etty Angst, parent of two children at the school.

Maka Alameida graduated from Maunaloa three years ago and said the personal attention he got from teachers made him a better student.

“You get choke one-on-one time with teachers, so if you fall behind they catch you up quickly,” he said.

Other Molokai residents are concerned about the strain closing the school would put on students and their families with the daily commute to one of the island’s other schools. Most students would have to take the MEO bus to and from school, which means leaving home before 7 a.m. and not returning until late in the evening. The long ride and bus schedule would make it very difficult for any of the students to participate in after-school activities or extra help sessions.

“Logistically it’s a tremendous strain on our youth, I can’t see a first or second grade student having to put in those kind of hours to go to school,” said Molokai High teacher Art Buchalter.

More Than a School
While losing any school can be tough on its students, closing Maunaloa may have even larger implications.

“The community makes this school unique. The kids have a lot of pride in this school, because it is theirs,” said Molokai resident Dart Bicoy.

Over 60 percent of the school’s employees live in the community and would probably have to move to find new work. Espaniola said she was also worried that families would relocate to make the commute easier.

“I think parents would have to move, the value of our homes would go down, whatever businesses we have here would leave too,” Espaniola said.

She and her brother, Danny Espaniola, are both members of the Consolidation Task Force that has to evaluate the school. Danny Espaniola, the current vice principal at the high school and former graduate of Maunaloa School, said he believes this is just another obstacle in the very bumpy road that goes along with living in Maunaloa.

“This community has gone through so much since the plantation era, but it has always bounced back from adversity,” he said. “This is just another hurdle in our challenge – another bump in the road.”