There’s nothing that says “thank you” quite like putting a hand stitched quilt around the shoulders of a veteran, according to Linda DeGraw, a part-time Molokai resident and quilter.

“Quilts are such a comforting and homey kind of appreciation,” DeGraw explained. “It’s really special when you put that quilt on [a veteran] and wrap them in all the prayers, love and energy that goes into making it,” she said. 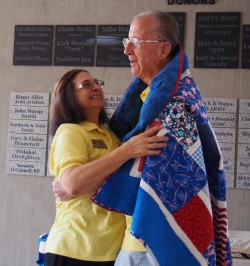 DeGraw drapes a handmade Quilt of Valor around Evans. Photo by Catherine Cluett.

A national foundation that DeGraw is part of, Quilts of Valor, makes it their mission to offer gratitude to veterans with handmade quilts. The organization has gifted more than 113,000 quilts across the U.S. since its inception 11 years ago, according to DeGraw, and the blankets can be donated to military hospitals, awarded to young veterans coming home from deployment or given to those who served in World War II, Korea, Vietnam or any other conflict.

For the first time, two Molokai veterans are counted among the recipients of Quilts of Valor.

Last week, DeGraw awarded a quilt to the island’s oldest veteran, Padraic “Paddy” Evans, who will be 93 at the end of this month, as well as a friend of hers, veteran Michael Prewitt.

“I’m in awe of the whole thing,” said Evans, as DeGraw draped the quilt she had made around his shoulders at the new Molokai Veterans Center last Thursday.

Evans said he feels guilty when young men come up to him today to thank him for his service.

He recalled coming home on leave and his dad handing him the keys to his 1937 six-cylinder Packard.

“My mother stood there and said ‘Bob, how could you let him drive that powerful thing?’” Evans laughed, recalling how he’d been used to flying bombers many times that powerful.

Evans went on to become one of the founders of the Hawaii Air National Guard, and served again in Vietnam, this time as a civilian doing “spook flying” out of Laos, dropping people and supplies. 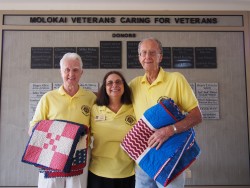 From left to right: Prewitt, DeGraw and Evans. Photo by Catherine Cluett.

Prewitt served in the British Army in Malaya, Cyprus and Northern Ireland, and worked at the headquarters of the United Nations.

“The worst for me was fighting in Northern Ireland. It was like fighting on the streets of Molokai,” he said, comparing the village battlefield to the island’s town and residential areas.

Both veterans gratefully received their quilts in front of the newly-completed tiles on the wall of the new Kaunakakai veterans Center, surrounded by fellow Molokai veterans.

“I think it’s important that every veterans has someone say thank you and welcome home,” said DeGraw, a veteran herself who comes from a family history of military service. “Molokai is my home and I truly feel the veterans who live here deserve the same kind of thank you as veterans on the mainland.”

She said she hopes to be able to gift a quilt to a Molokai veteran twice a year in the future.