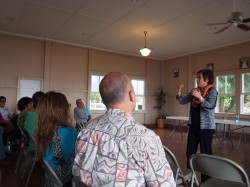 With the primary election approaching in August, Congresswoman Colleen Hanabusa made a stop on Molokai last week and sat down to talk story with residents and answer questions. Here, The Molokai Dispatch summarizes some of those questions and her responses.

A fourth generation resident from the Waianai coast, Hanabusa said though she is not Native Hawaiian, the cause is especially important to her, along with education and seeing student success in science, technology, engineering and math (STEM) fields.

Question (Q): How do you see the future of energy in Hawaii?
Colleen Hanabusa (CH): You’re not going to go independent of fossil fuels overnight. For Molokai, you could probably invest in photovoltaic. We generate power better on the neighbor islands than on Oahu — but Oahu has the biggest demand. So how do we get that source to Oahu? Many are now saying geothermal is a good economic opportunity for Native Hawaiians.

The submarine cable concept is one we all understand. The problem has always been with who will pay for it and environmental concerns about what will it be like running electricity under the ocean. A lot of the future of Hawaii will depend on technology. I’ve always thought communities should power generate for themselves. We need the cable only if power needs to be transported. Shouldn’t each island be self-sufficient? That should be the first question we ask.

Q: There’s a lack of input from local people from Hawaii. People are waiting for Obama to use executive order for Hawaiian recognition and how will that trickle down to us?
CH: It’s pending in Washington whether consultation will become codified as part of the rules of the Secretary of the Interior. One of the issues the President has been looking at is whether or not he will by executive order make the decision to do federal recognition… the consequence of that is still unclear.

One of the concerns is… the Hawaiian Nation would be in excess of 500,000 people. How would you define the people and their rights?

These are legitimate questions that people don’t have the answers to.

Q: Our blood quantum is dwindling and we see our grandchildren not even having 25 percent. So what’s going to happen to future generations of homesteaders? How can we pass this land on in perpetuity?
CH: Native Americans have Indian Country held in trust forever, whereas DHHL uses a fee simple. That changes the whole structure. More than likely that would have to go to Congress to change DHHL to Indian Country. Alaskans and Native Americans have recognition, but Native Hawaiians don’t.

The other side of [making DHHL land in perpetuity] is that there are still beneficiaries who qualify who want to get land but they’re waiting. They wouldn’t be able to get it if the land never goes back into the pot, so to speak.

Q: In case of a tsunami, there is no secondary access road for the east end of Molokai. What can we do to change this?
CH: You’re preaching to the choir — I have a lot of empathy with what you’re saying because I’m from Waianae, where we have the same situation. The issue is who is going to pay for it. It’s all going to be in the details of what it will go and which communities will be affected, and who should share in that cost. Get the legislature to do a study and then they can look to appropriate funds for planning.