Hail to the Hall 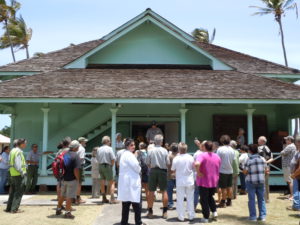 Members of the Kalaupapa community gather around the entrance of Paschoal Hall at its inaugural opening and blessing last week. Photo by Catherine Cluett

Paschoal Community Hall, formerly known as Kalaupapa Social Hall,  was once the center of Kalaupapa’s social life, but it had been years since the building was fully usable – until last week. Kalaupapa residents and patients celebrated the unofficial reopening and blessing of the 97-year-old hall, the settlement’s largest historic building, which was recently renovated and restored by the National Park Service (NPS).

The hall was built in 1916 as a place “for coming together, for socializing, for ‘talk story,’” according to the NPS website.  It was used to host silent movies, dances, amateur theater performances and concerts.

The original building stood 110 feet by 40 feet and sat on 124 concrete piers, according to the 1916 Territory of Hawaii Board of Health Annual Report.  It accommodated 350 people, mostly Kalaupapa residents.

In 1931, the building was outfitted with a sound system, a $7,500 project that was funded by the territorial legislature “because recreation was thought to be of enormous value as therapy for the patients,” stated the website.  The first “talkie,” or sound program, was shown in the Kalaupapa theatre on October 9, 1931.  After that, it hosted an average of two programs weekly.

The hall even hosted famed entertainers such as Edgar Bergen with Charlie McCarthy, John Wayne and Shirley Temple visited the hall, according to Steve Prokop, current Kalaupapa NPS superintendent.

It was renamed Paschoal Hall in 1958 after Manuel G. Paschoal, a Hawaii legislator who served as an advocate for the people of Kalaupapa.

In 1979, the theater was closed due to its condition, and a year later, both the hall and surrounding town, mostly abandoned, became part of the Kalaupapa National Historic Park.

Hawaii’s U.S. Sen. Daniel Inouye has had a large part in securing funding to restore the building, said Prokop.  In 1998, he helped the NPS to secure funding to replace a severely damaged roof as well as other repairs and renovations to the hall’s exterior.  In 2009, Inouye secured an additional $500,000 for the hall’s interior.

Prokop said during renovations, as much of the original furniture and appearance have been preserved as possible.  The original chairs and windows were restored, the paint color stayed the same, and eventually NPS hopes to restore the old projection room, box office and side rooms.

A new screen, curtains, audio and video systems will be installed this summer, said Prokop.

Kalaupapa residents and patients welcomed the reopening of the historic hall at last week’s  monthly community meeting, which was held inside the renovated space.

“The opening of Paschoal Hall will revitalize the best memories of entertainment and fun times experienced by the patients in their youth and bring a new era of entertainment and education possibilities for all future users of the facility,” wrote Kalaupapa Department of Health Administrator Mark Miller via email.

An official opening of the renovated Paschoal Hall, with Sen. Inouye, will be announced later this year.

One Response to “Hail to the Hall”