Habitat for Humanity Partnering for Solar 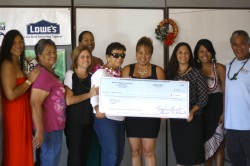 Molokai is making steps towards becoming a clean energy community as 163 homes will be receiving free photovoltaic (PV) solar units while cutting their energy bills in half. The Office of Hawaiian Affairs (OHA) has granted $32,600 to Molokai’s Habitat for Humanity in support of their partnership with solar company Kala Power Inc. and the Department of Hawaiian Homelands (DHHL). The deal will combine affordable housing and renewable energy solutions for low-income Native Hawaiian families living on homestead land.

“Electricity is one of the highest costs all Molokai residents and businesses have to contend with so projects to help alleviate the high costs of fuel as reflected in electrical rates is a tremendous positive for Molokai,” said Halealoha Ayau, DHHL’s acting district supervisor for Molokai, via email.

In fact, the nation pays an average of 8 cents per kilowatt hour compared to the 42 cents Molokai residents pays under Maui Electric Company (MECO)—a difference of 280 percent, according to Ayau.

However, that is changing for the first 163 homestead households who have already applied and under permit processing for Kala’s new lease program. Kala Power is a locally owned, Maui-based solar company dedicated to supply Hawaiian communities and low-income residents of Maui County with affordable solar energy.

The Finances
Last Tuesday, Molokai’s Habitat for Humanity staff expressed their excitement and gratitude for their new partnership with Kala and DHHL as well as their increased financial support from OHA at a press conference. In addition to OHA’s $32,600 contribution, they have also awarded Habitat $300,000 for fiscal year 2014 and 2015 in support of Habitat’s Native Housing Program, said Zhantell Dudoit, executive director of Habitat for Humanity on Molokai.

“It’s not possible to come up with a wonderful idea or to sustain the idea without good partnerships,” said Dudoit. “The only way we’re going to become a better, sustainable community is if we all stop competing and start enhancing each other in business, in life, in everything that we do over here.”

Since its formation in 1998, Molokai Habitat for Humanity has built 21 homes on the island with a focus of providing affordable housing for families earning less than 50 percent of Maui County’s average family income—earning under $20,000 annually for a household of four. When Dudoit became executive director in 2011, she took on the task of merging affordable housing with energy efficient ideas and systems.

“When you look at the average utility cost of what we’ve been paying on Molokai for years, people have been saying come up with energy efficient ideas,” said Dudoit. “But the ideas were always too expensive, or so off the norm it was hard to get the masses to join.”

That was until Dudoit found an advertisement for Kala Power in The Molokai Dispatch, she said.

How It Works
Kala acts as a micro-utility company and is financed by a chain of banks and investors throughout the nation, according to Kala Molokai representative Sybil Lopez. Benefitting from federal and state tax credits, the company installs and maintains a PV unit at no cost, no down payment and no credit check to the resident, Lopez said.

Additionally, the company promises to save households thousands of dollars annually on their electric bill, paying Kala only for the power that’s used, at a 20-year fixed rate of 28 cents per kilowatt-hour.

“Our vision was to make sure that all Hawaiian people get a PV on their house,” said Kala Power owner Kimokeo Kapahulehua. “We wanted to take the resources that really belong to us and figure out how to capture it to provide electricity for our ohana.”

Other costs associated with Kala, according to their webpage, includes a monthly charge of $18 to Maui Electric for connection to the grid, and a one-time $200 application and system design fee. Kala will take care of obtaining the proper permits and permissions from the county, the electric utility and DHHL, which currently leases property to 20 of the 21 Habitat homes on the island.

The idea of the partnership, explained Dudoit, was that two individual companies committed to nonprofit servicing would come together and utilize their distinct expertise. Habitat would come up with affordable housing price between $270 and $477 each month while Kala Power would write an affordable solar lease program, 50 percent less than what residents were paying before, she said.

Kala investors agreed to support the partnership on the condition that PV units are installed on at least 200 Molokai households, said Dudoit. From August to October, she was able to secure 163 applications, sponsored by OHA, which are currently waiting for permit approval. The remaining 37 applications are being processed, she added.

“We’ve been getting our permits [from MECO] in two weeks. We already have three [approved permits] so we can get those through at the beginning of the year.” said Neighborhood Power Corporation (NPC) founder, Stephen Gates. NPC is a California-based corporation that is helping Kala Power bring innovative energy solutions to Hawaiian communities.

Overcoming Technical Challenges
According to Lopez, the 163 applications sent to MECO could potentially backlog their review process, delaying planned installation dates. She assures all applicants waiting for permits will receive their PV units and thanks them on behalf of Kala for their patience.

Dudoit also expressed concern whether Maui Electric can support the 200 homes requesting to be added to the grid, but said she believes new energy ideas need to be put in motion before old ideas get fixed. She added they are considering off-the-grid installation if the utility cannot accommodate additional renewable energy at this time.

Dudoit said they will be installing PV units only on already-built homes, but plan to begin installing them on new Habitat homes, starting with four planned constructions in 2014.