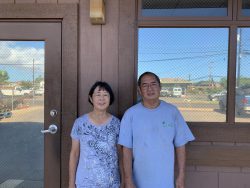 Karen and Glenn Takata the day after their retirement. Photo by Catherine Cluett Pactol.

Forty years and thousands of car repairs later, Glenn and Karen Takata, owners of GT Auto Repair in Kaunakakai, have closed their business to retire.

They opened GT Auto in 1980, renting a space now occupied by Maka’s Korner. Glenn grew up on Molokai and went to school on Oahu to be a mechanic, saying he always wanted to own his own shop back home.

When the couple made their home on Molokai in 1977, Glenn first worked for a few years as a mechanic at a shop owned by Valley Isle Motors.

“My plan was to open by own business but I didn’t want to open blind,” recalled Glenn, so he got some experience under his belt while he felt out the field on Molokai.

When GT Auto held its grand opening on March 22, 1980, it was a dream come true. Karen said they started the business from scratch, taking out a loan rather than asking their parents for assistance.

“I was the youngest of all the shop owners [on Molokai] when I opened, and now I’m the oldest,” Glenn laughed. 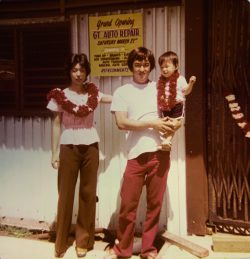 Karen and Glenn, with their young son, at their grand opening in 1980. Photo courtesy of the Takatas.

He repaired the vehicles, while Karen managed the business side. (“It’s not just fixing the cars… the most important thing is here in the office,” Glenn said, nodding to his wife.)

First, it was just the two of them. Then they hired one mechanic. At the most, they had five employees working at GT and a separate Napa shop.

GT offered everything from air conditioning to transmission work to brake repair and tune ups, bringing equipment upgrades and technology to the island’s repair scene.

In 2001, they moved the shop to their current Kamoi Street location in a shop they built on property they owned.

When asked if they had any memorable days, Glenn shrugged.

“Nothing, actually,” he laughed. “Every day was a grind.”

“I can’t say anything memorable happened, it’s a boring life just fixing cars every day,” added Karen with a smile.

Thankfully, they never had any accidents, Glenn said.

“He’s stressed a lot of the time, but he enjoys that,” laughed Karen. “He gets stressed out when things don’t go right, but he likes that rush, I think.”

He often lost sleep over the job.

“Sometimes in the middle of the night, I’d wake up thinking about the problem we have with a car,” said Glenn. “I used to work into the night… When I used to do transmission work, I used to stay up, I didn’t want anyone bothering me when I do that.”

A transmission job could take five to six hours.

“When it comes to cars, people need their cars so they get all stressed too,” said Karen.

One of the biggest challenges of the work is keeping up with changing technology. In the Army, Glenn said he used to fix radios, and that knowledge of electronics served him well as a mechanic. Still, he had to keep learning.

He used to work during the day, fly to Oahu at night to take classes, then fly back for another day of work.

“Everything is electronic now, I can’t keep up!” he said.

Over the last few years, the couple downsized the business to focus on maintenance repairs.

Now, with their last day of business behind them on Aug. 28, the Takatas are ready to enjoy a rest.

“I guess I had my fill,” chuckled Glenn. He thanked his employees, some of whom had been with him in the business for more than 20 years.

“Right now I won’t miss the work, but I’ll miss seeing a lot of our customers that we’ve known 40 years,” said Karen.

The couple expressed gratitude for their customers and their patronage. The Takatas wrote more than 100,000 invoices in the last four decades.

They said the shop is up for sale, with some interested buyers, but its future is not yet decided.