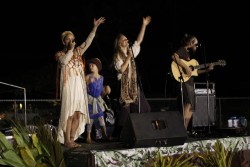 Mama-T and Tubby Love were some of the night’s performers. Photo by Colleen Uechi.

Last Saturday’s third annual Grassroots Benefit Concert at Duke Maliu Park celebrated homegrown, all-natural products –and the creatures that make it possible. The event’s message was “Mahalo i Na Halihali `Ehu Pua,” which means Thank You to the Pollinators, and highlighted the need to protect pollen-carrying creatures like butterflies and bees.

“Pollinators are vital to growing food, and we want to just bring that issue to light,” said Mercy Ritte, one of the event organizers.

U.S. Department of Agriculture Plant Pathologist Matthew Goo said that butterflies face the predatory challenges of spiders, wasps, lizards and in particular, the bulbul bird. Goo offered people a way to help through the Pulelehua Project, which seeks to record sightings of the disappearing Kamehameha butterfly, a native species that has yet to be officially documented on Molokai.

The best way to teach people how to aloha aina, said Fred, is “by example.”

“Everyone is different in the part they play,” he said. 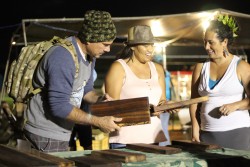 Live bands and a fire hula hooper entertained the crowd throughout the evening. All proceeds from the silent auction went toward the Ho`ola Hou Community Supported College Fund, for students pursuing environmental or agricultural studies. This year there were six recipients, who will each receive just over $1,000 throughout the school year, according to Ritte.

Molokai farmer Bobby Alcain was named Featured Farmer for his dedication to environmentally friendly practices. It’s an honor that Ritte said they hope to continue at similar events in the future.

“It’s such a hard job, it’s a hard life,” acknowledged Ritte. “We just want to show our appreciation and thank our farmers who are growing food in a very safe and sustainable way, with the understanding of the environment and the land.”