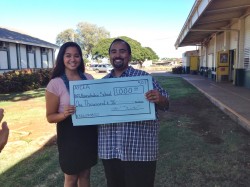 When she was in eighth grade, Molokai High junior Momi Afelin wrote her first grant for robotics education. Fast forward three years and she has five successful grants under her belt, with the most recent awarded to the Kaunakakai Elementary robotics program last Friday morning.

“I hope this grant opens the kids’ eyes to all the opportunities that are out there for them in STEM,” Afelin said, referring to science, technology, engineering and math fields

For the last two years, Afelin has volunteered her time as a student mentor after school at Kaunakakai Elementary to help students with their presentation skills. Last week, she presented a grant check for $1000 from the Air Force Communication and Electronic Association (AFCEA) for the school’s fifth grade robotics program. Monsanto also awarded the robotics program $250.

To date, Afelin has written three single-authored grants from AFCEA and co-authored two grants with Fox from the Maui Economic Development Board (MEDB) and Monsanto. Afelin first got involved with grant writing after submitting a science fair project on robotics to the Hawaii State Science and Engineering Fair in seventh grade. It wasn’t until eighth grade that Afelin was approached by AFCEA to write a grant for her school. That year, her grant awarded $1000 for STEM education to Molokai Middle School’s robotics program from AFCEA.

She’s continued writing grants every year since. When Afelin began mentoring robotics at Kaunakakai Elementary, she said she knew the school needed more funds so she took it upon herself to write grants for the school.

Although grant writing is time consuming, the funding for continued education is worth it in the end, Afelin said.

“There’s so much funding out there and it’s just a matter of sifting through it to find what applies to you by highlighting the challenges you can overcome through grant writing,” she said. “Coming from Molokai and being economically depressed is an advantage when you’re writing a grant because it shows you need this money for your community and for your schools.”

Kaunakakai STEM coordinator Kawika Gonzales accepted the grant checks on Friday. Gonzales works with a committee to build more STEM learning opportunities for grades pre-K through six, and the funding received will support the students.

“It’s really important that our community realizes that they can contribute to and benefit the students of Kaunakakai School through volunteering and grant writing,” Fox said.

Jennifer Whitted, the Kaunakakai Elementary Parent Community Networking Coordinator, is a STEM advocate and Fox said Whitted welcomes those interested in helping with the school.

Afelin said she isn’t finished yet. Before graduating high school early this year, she’s addressing suicide prevention in her senior project and will write grants to provide the necessary facilities. Afelin said she’s working to create a suicide prevention group for middle school students. The students will be trained to connect peers to the preventative resources they need. So far, Afelin has been awarded $50 by Area Health Education Center.

“No matter what kind of education you want to pursue, money should never be a barrier for you and there are unlimited funds out there,” Afelin said. “You just have to work your way into taping into to those funds and look at what they are asking for, what you can do with that money and how it applies to your mission.”