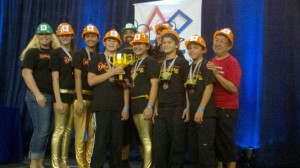 The Molokai Middle School robotics team, the Molokai Golden Eyes, won the First Lego League state championship last Saturday at the Neil Blaisdell Center in Honolulu. Team members Noah Keanini, Erik Svetin, Caele Manley, Kaitlin DeRouin, Lily Jenkins, and Katy Domingo competed against 52 other teams from around the state, and became the first team not from Oahu to ever be named the grand champions. Coached by Kawika Gonzales and Jenn Whitted, the Molokai Golden Eyes will be representing Hawaii at the national competition held in the spring of next year. The team is pictured here with Sarah Tamayose, Hawaii First Lego League president, at right.