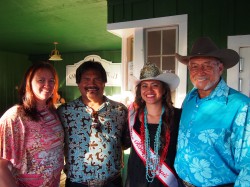 From left to right, Cheyanne’s parents Deanna and Kalapana, Cheyanne Keliihoomalu, and her grandfather Jimmy Duvauchelle. Photo by Catherine Cluett.

This year’s Miss Hawaii Rodeo, Cheyanne Keliihoomalu, is making history as the first contestant from Molokai to compete in the Miss Rodeo America Pageant this December. She gained support on her home island last weekend with a fundraiser dinner held at Coffees of Hawaii.

“The support has been overwhelming and I really appreciate all the love,” said Keliihoomalu.

With the attendance of family and friends, the 24-year-old used it as an experience to practice her speech that she has to give at the national pageant in Las Vegas on Hawaii and the history of the paniolo culture. Describing herself as shy, Keliihoomalu and those helping her prepare said she is working on gaining confidence to present herself before a national audience. In addition to becoming comfortable in front of crowds, she also has to learn a thick book of rules for a written test, brush up on her horsemanship, prepare for pop quizzes from judges, and acquire an extensive wardrobe for the pageant portions of the competition.

“Ever since she was young, she’d charge ’em,” said her grandfather, legendary paniolo Jimmy Duvauchelle. “I’m glad we have the opportunity to take the paniolo culture… to the national stage.”

With just a few months to get ready to be judged on horsemanship, knowledge of rodeo, appearance and personality, Tami Deever, a National Advisory Council member who is helping Keliihoomalu prepare for the competition, said she’s been very busy.

“They’re looking for a well-rounded young woman,” said Deever. “We’re especially happy to have a girl from Molokai… it’ll be a lifestyle that [will surprise] many competitors.”

At the dinner fundraiser last Saturday, Keliihoomalu was also honored with a Maui County Council resolution.

“Her years of growing up around ranching and participating in Molokai rodeos and later the Hawaii High School Rodeo Association have prepared Cheyanne for this moment,” the resolution states. “She represents Molokai, Hawaii and our culture proudly perpetuating a rich paniolo history unique to our islands.”

As a sixth generation paniolo on Molokai whose family worked for Molokai Ranch, Keliihoomalu said her mother and her aunt were the first women paniolo in her family. Following in their footsteps, she never thought it would bring her this opportunity.

“It’s not so much win or lose, it’s the experience,” said Deever. “It’s taking pride in your knowledge, skills and experience. It’s an experience she’ll cherish forever.”

Keliihoomalu is working to raise $5,000 for the trip to cover airfare, clothing for the many costume changes required and other expenses for the five-day event. Those wishing to support her can make checks payable to Miss Rodeo Hawaii Pageant and mail them to Miss Rodeo Hawaii Program, 87-839 Farrington Highway, Waianae, Hawaii 96792.

Keliihoomalu said she would like to thank everyone who made Saturday’s event possible.