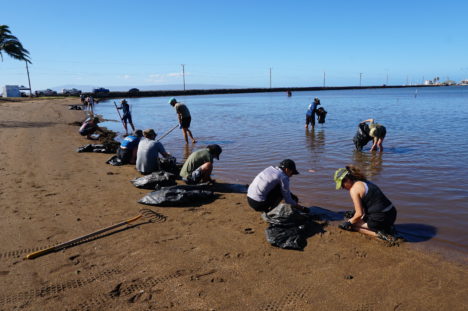 The effort brought about two dozen people to help with the cleanup. They identified the invasive limu, separated it from any native species growing with it, and bagged it for removal. They joined a growing number of regular volunteer efforts that have been successful in reducing the volume of ogo around the wharf area, which sometimes collects along the shoreline in massive quantities.

“We take out these invasive algae and limu so we can make room for our native limu to take place and bring our native limu come back,” she said. “My grandmother was actually a very avid limu gatherer and I remember a little bit before she passed away, I would always ask her why she didn’t gather [as much anymore] and she told me it was because the water isn’t as cold as it used to be.” 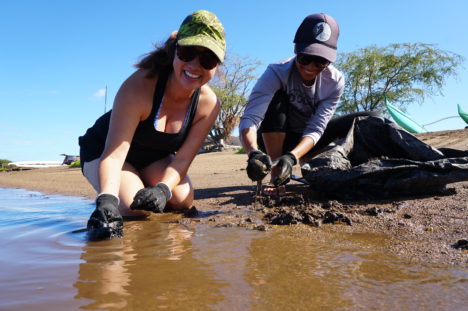 Place said she grew up eating limu ‘ele’ele and other native species that used to be plentiful.

“… To think it won’t be here for future generations and they wouldn’t be able to have those delicacies… going out and getting the limu and cleaning it and preparing was a lifestyle that we had,” she said. “Honestly, this project itself is really close to my heart because of my family… so I feel it’s so important to come and take out the [invasive limu] so native limu can grow for future generations to come.”

Sustainable Coastlines is an Oahu-based organization that organizes beach cleanups and has come to Mo’omomi for years to assist in community efforts to remove marine debris. Last week, the organization brought a team to Molokai to assist in island-wide conservation efforts. Executive Director Rafael Bergstrom said they had originally planned their annual Mo’omomi cleanup last year when Sust’ainable Molokai reached out to them about partnering for a gorilla ogo cleanup.

“Then COVID spikes happened again and pushed it off a year but it’s really nice to be here,” he said. “What makes it really special about this too is we’re diversified across the island… in past years, we’ve had a strong focus on Mo’omomi but this time we get to focus on different communities and be of service to different communities [across Molokai].”

Check next week’s paper for more on Sustainable Coastlines’ visit.