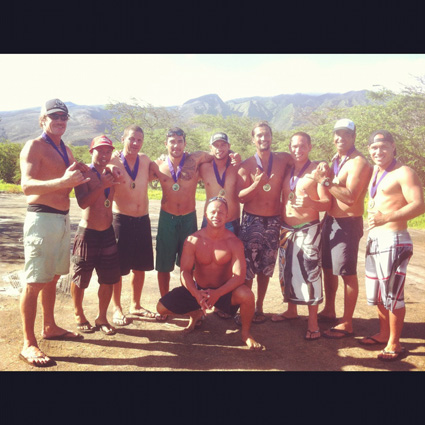 The men’s team from Molokai’s Wa`akapaemua Canoe Club returned as champions of this year’s Great Kahakuloa Race, held on Maui Sunday morning. The race, sponsored by Na Kai Ewalu, spanned 26 miles from Maliko Gulch to Canoe Beach in Lahaina. The team finished in 3 hours and 25 minutes, followed closely by Wailea Canoe Club and then Hawaiian Canoe Club, both from Maui.

Last year, the crew placed third in this race. This is the first time since the 1980s they have beaten Hawaiian Canoe Club, one of the top crews in Maui, according to paddler Clint Labrador.

“The talent pool in Maui is huge, so we’re super stoked that we [from Molokai] were able to take first,” said Labrador. “It’s just awesome for Molokai.”

The women’s team from Wa`akapaemua also raced on Maui this weekend, placing second overall in the 9.5-mile race from Maliko Gulch to Kahalui Harbor Saturday morning.