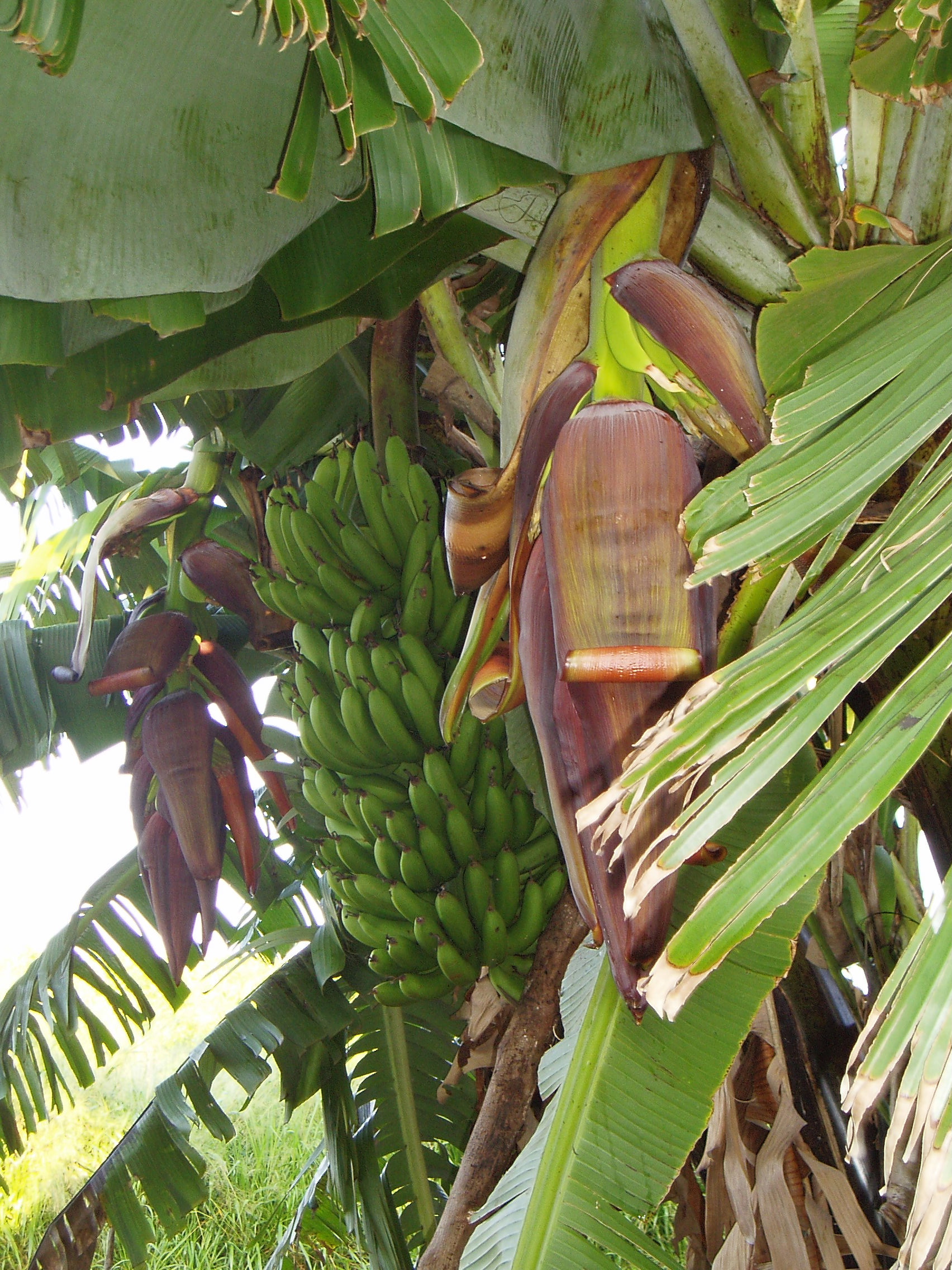 Banana was first brought to Hawaii by the early Polynesian voyagers, and believed to have arrived in three distinct waves from different parts of the Pacific, identified by group names such as maoli, popoulu, and polapola. The majority of banana varieties arrived from Tahiti and Samoa, but countless others were derived from mutations of the first introductions, many of which are unknown outside of Hawaii.  Over 70 varieties of Hawaiian banana were known from the Kona area alone in the 1870s.

There are two main species of banana, Musa acuminata (A) and Musa balbisiana (B), and all banana varieties have blood from one or both of these species. There are countless banana varieties in Hawaii, and can get very confusing trying to identify them, but I will focus on the main commercial varieties.

The AAA group is commercially important, and includes the Cavendish types, Giant and Dwarf Cavendish, Robusta, and Grand Nain. These are usually planted in rows of seven to eight feet, with eight to 12 feet between rows.

•    Dwarf Cavendish – commonly called Chinese or Pake, introduced into Hawaii in 1855 from Tahiti. This is a common backyard variety characterized by relatively short plants. Excellent dessert banana, but poor shelf life and susceptible to freckling, and cigar or banana end rot. Small bunches, 12-30 pounds, this is a favorite banana for making a Puerto Rican dish called pasteles.

•    Giant Cavendish is a mutation from the dwarf Cavendish discovered in North Australia, and is called Williams in Hawaii. Hawaii’s main commercial cultivar, it competes with the imported banana, also Williams types. Large bunches are up to 100 pounds or more. The taller Robusta and shorter Grand Nain or Chiquita are probably mutations and grown in Hawaii.

Another AAA group is the Gros Michel or Bluefields. Formerly the main commercial variety in Hawaii until decimated by Panama wilt fungus, these plants originated from Bluefields, Nicaragua. Panama wilt is not a problem on Molokai, and the dwarf form is grown here. Plant needs to be propped up when fruiting, and produces a large full banana with an excellent taste.

•    Cocos or Dwarf Bluefields – same as Bluefields except shorter plant. A mutation from the regular Bluefields. Also known as Highgate.

The AAB group includes two Brazilian cultivars. Known only in Hawaii as Apple, this is not the true Apple variety. They’re susceptible to black leaf streak, a foliar disease prevalent during rainy months, but resistant to Panama Wilt, a fungus attacking the root system.  Known internationally as Pome, these are usually planted in rows of eight to 12 feet with 10-15 feet between rows. The cultivars include:

•    Dwarf Brazilian is a mutation of a tall Brazilian discovered in Santa Catarina, Brazil. Called Dwarf Apple or ‘Santa Catarina Prata’, this cultivar can reach fifteen feet at the top of the bunch, and bunches can range from 30-75 lbs. Fruits have a robust taste with a tang, and good shelf life. This is the most-wind tolerant of all cultivars in Hawaii.

In closing, there’s no such thing as a banana tree. Banana is considered a large herb with its trunk composed of compressed leaves. Each leaf starts from the base of the plant, and is one continuous piece. Plant now and you’ll have a bunch in less than a year.