Out of a total of 219 Molokai residents who participated in an online survey, 109, or 49.77 percent, are in support of a moratorium (temporary suspension) of all GE operations and practices within Maui County. The moratorium would last until an environmental and public health impact study is conducted and finds the proposed cultivation practices to be safe and harmless.  Of the total survey participants, 110, or 50.23 percent, were not in favor of this bill. 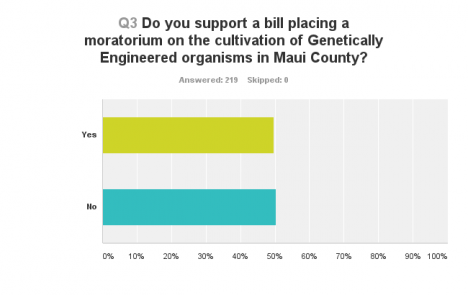 One of those in favor shared that, “because of their history of contamination, collusion, coercion and endless greed for capital and control, companies like Monsanto cannot be trusted, and therefore independent studies need to be conducted to insure these practices taking place on our island are safe for its inhabitants and future inhabitants.”

Another individual argued that, “the State Constitution protects the public trust. In the Waiahole decision, the Hawaii Supreme Court ruled that the public trust as a constitutional mandate includes the adoption of the precautionary principle which essentially states that where there is no definitive scientific evidence, it is best to err on the side of caution to prevent potential harm to people, the natural resources, and the environment. The County would be following this constitutional mandate by placing a moratorium on GE crops until studies can be done to determine what the risks are.”

With contrary beliefs, one has asserted that, “GEO [genetically engineered organisms] is a process for farming as Organic is for organic farming. There is no scientific evidence that displays GEO processed foods are a danger to the health of humans and animals. Until the scientific community determines that the process is harmful to humans and animals, I will continue to say no on placing a moratorium on GEO in Maui County.”

Another respondent said they feel strongly that “it is highly regulated and tested. It has been used for many years with NO ill effects based on true repeatable science.”

Here is what the proposed bill will look like on the election ballot:

Should the proposed initiative prohibiting the cultivation or reproduction of genetically engineered organisms within the County of Maui, which may be amended or repealed as to a specific person or entity when required environmental and public health impact studies, public hearings, a two thirds vote and a determination by the County Council that such operation or practice meets certain standards, and which establishes civil and criminal penalties, be adopted for Maui County?