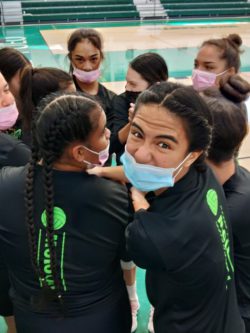 The Lady Farmers Volleyball team won two matches at Maui Prep when they traveled to West Maui last weekend. Molokai got the sweep winning in three sets on both Friday and Saturday.

Friday’s score was 25-8, 25-7 and 25-14. Lia-Chae Meyer had eleven kills and one ace, Jordyn McCutcheon had 10 kills, six aces and two assists and Daisci Burrows had 30 assists, two kills and five aces.

“Our girls played together as a team, and they were able to excel on some new plays we’ve worked on this past week,” she said. “We had improvement in all phases of the game, and I could not be any prouder of our team. We will continue to work towards our goals, and I am proud of the girls’ determination.”

Molokai will host Lanai Nov. 26-27 to end the regular season. Friday Nov. 26 will be Senior Night for seniors Meyer and McCutcheon.The MIL DII Girls Volleyball  Championships will be at Maui Prep Dec. 1-4, followed by the state championships scheduled for Dec. 8-11 on Oahu.