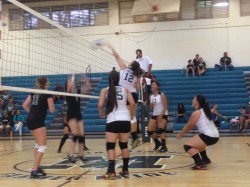 The team played well for their first game of the season, said head coach Mahea Rawlins. She said she hopes the girls will continue to work on their teamwork.

“I think nerves were coming out for the first game [on Saturday],” Rawlins said. “When they play, they give it their all, but I think there’s still a lot to be worked on.”

The team of 14 girls brought on five freshman and two sophomores this year, after losing six seniors last season.

“We’re still really young,” said MHS senior Rebecka Adolpho. “Coming together as a team is going to be a struggle for us early on in the season, but I think learning other’s tendencies, what they’re good at and being able to incorporate it in our team is what we need to work on.”

After losing the first set Saturday, the Lady Farmers came back to win the last three sets. Rawlins said the stacked front row with sisters, senior Shanrese “Lehiwa” Pedro and freshman Sehja “Luhi” Pedro, and Adolpho, make up one of the team’s strongest lineups.

“Fighting back from the bottom isn’t easy but we did it which is a good thing,” Lehiwa Pedro said. “My team did good and I look forward to the next game.”