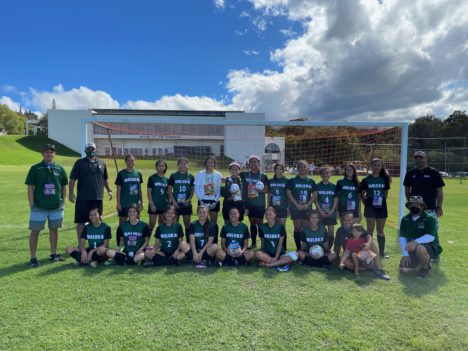 In its first season in 10 years as an official Molokai High sport, the Girls Soccer team played its first and only games of the season against Seabury on Maui last weekend. The junior varsity Lady Farmers ended up playing Seabury’s varsity team. Though they lost both games — 8-0 on Friday and 4-0 on Saturday, Head Coach Matt Yamashita said they gave it their all.

“[On Friday] players learned a lot of lessons that they carried into Saturday’s game,” said Yamashita. “Saturday the Farmers defense got more physical and only allowed the Spartans four goals. Farmer offense was also more aggressive and had a number of good downfield drives where Seabury’s goalkeeper barely stopped a few really strong shots on goal.”

The team of 18 girls practiced hard during a short, six-week season this year, and Yamashita said they plan to play as a varsity team next year.

“No question the girls gave their 100 percent and showed great growth and strong potential for next year,” he said.