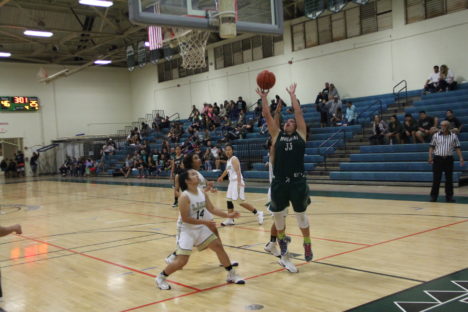 Molokai hosted the MIL Girls Basketball Tournament last weekend at the Barn, and after three hard-played games, the Lady Farmers ended their season without a ticket to the state tournament.

Molokai played strong in the tournament’s first game on Thursday night against Lanai, closing the night at 52-29, advancing the Lady Farmers  to the championship game against Seabury on Friday. Molokai was led by senior Brooke Keliihoomalu with 19 points. Sydney Rawlins had 13, Camille Ledesma had 7 points and 5 assists and Nadia Augustiro added 8 points.

“The coaching staff is very proud of the Lady Farmers tonight playing inspiring defense to avoid elimination,” said Molokai Coach Lee DeRouin Thursday night. “They were really are clicking on the offense end getting wide and making those extra passes to the open spaces.”

On Friday night, Molokai squared off against Seabury, falling to the Spartans 40-19. Seabury was led by Kyra Cambra with 18 points and Anaulei Tuivai added 10. Molokai had a hard time scoring and was led by Sydney Rawlins with 10 points and Cahlvrie Horner added 6.

“I was very happy with our girls’ effort tonight,” said Seabury Head Coach Johnathan Furtado. “The girls did a great job keeping their composure throughout the game. Molokai is well coached with great senior leadership so we needed to play our best game.”

Seabury earned the regular season and the tournament championship so that forced a playoff game for the second spot in the state tournament between Lanai and Molokai on Saturday. It was the season’s sixth meeting between the two team, and Lanai came out on top 46-25 to earn a trip to states tonight. The Pine Lasses were led by Gina Anton with 11 points. Tyana Foster added 13 and Kayla Garcia had 9.

Lanai Assistant Coach Christian Yumol said his team was ready for the challenge,

“Our girls have been in this scenario before… I simply told our girls that if we get that chance, we’re not letting it slip away,” he said. “They took care of the rest by playing the way they did. My hat goes off to Coach Lee and the Lady Farmers!  They are a competitive group and their program has had an amazing run of nine of the last 11 years as league champs which is dominating!  I have the utmost respect for him and his coaches and players!”

Keliihoomalu said it’s a bittersweet finish to her last season with the Lady Farmers basketball team.

“Although we came up a little short, I am proud of my team and how far we’ve come,” she said. “It’s sad knowing my high school basketball career is over and it was an honor and a privilege to have been a part of such a great program these past three years….”

“It was a rough season from the beginning with injuries after injuries, but growing as a team and having each other’s backs throughout it all made us stronger than ever,” she reflected. “We played our hearts out from start to finish and left everything on the court; we did our very best but fell a little short at the end! I’m going to miss playing high school ball….”

DeRouin said he is very proud of his team and wishes the other teams the best of luck at states.

“We overcame many obstacles this season and still played with such great intensity and Farmer pride,” he said. “Our team really learned to live in the moment and created some long lasting relationships with each other. We loved the journey to help prepare them in life skills for the future.”