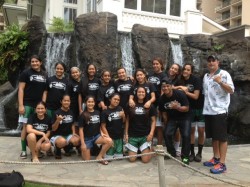 For girls basketball head coach Lee DeRouin, 14 athletes entered this season with high energy and ambitious goals, determined to represent Molokai at the state level. While they were set back by some injuries along the way, the Lady Farmers left Oahu’s Neal Blaisdell Center two weeks ago considered one of the top teams in Hawaii.

“As a team we were able to make many of our goals this year,” said DeRouin, via email. “Even though we fell short of the state championship, we were able to accomplish a state semi-final game and got to play a consolation game.”

After their 14-1 season record and earning the Maui Interscholastic League Championship (MIL) title, the Farmers traveled to Oahu Wednesday, Feb. 5 as the only Division II MIL team competing in the state tournament.

Receiving the number four seed, they earned a seat in the semifinals after their 41-35 victory against Kapaa. After being defeated by Hanokaa 54-21 and Hawaii Baptist 43-27 in the consolation match, the Farmers earned fourth that Friday.

“The coaching staff is very proud of the Lady Farmers’ performance this year at the state tournament,” said DeRouin. “They did a tremendous job in competing with the best teams in the state.”
DeRouin said after the athletes’ strong performance this season, he is confident some players will get the chance to play on this year’s MIL all-star team.

“The seniors will certainly be missed but they left a good foundation of hard work to be passed on to next year’s team,” said DeRouin.

Although the tournament marked the end of girls basketball for the 2013-14 year, DeRouin said both he and the team appreciates the community’s unfaltering support throughout the season and state competition.

“…From attending games, supporting with meals, dropping off drinks and just their overall aloha shared with the team, it really makes a positive impact,” he said.