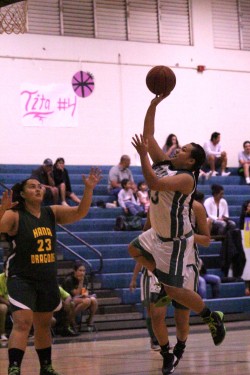 Sophomore Kaimana Kahale moves the ball down the court during the season opener of boys basketball last Friday night against Seabury. Photo by Jessica Ahles

With an undefeated Maui interscholastic League (MIL)Division II record this season, the Lady Farmers took to their home court last weekend, looking to add another win under their belts against Hana. Today, they sit at a record of 8-0 after their final scores of 46-11 Friday night and 37-22 on Saturday.

“They are the only [Division II] team in the MILs [this year] with that record,” said Hoku Haliniak, Molokai High School (MHS) Athletic Director.

“We just got to continue working hard on the court,” said DeRouin. “We’ve been having trouble in the half court offense, so I’m looking to work on that with them in upcoming practices.”

“Lehiwa and Hepua are getting the rewards of our strong defense,” said DeRouin. “It’s a total team effort of the defense and they put themselves in a good position to get some good scores,” said DeRouin.

Last weekend’s game was also the girls’ senior night, as the remainder of the season will be played off island.

“We’re really close, we’re all like a family” said senior Taylor Keliihoomalu, sharing her favorite part of the season so far.

When asked what she will miss most about Farmer basketball after the season, she said, “the girls.”

Over the next few weeks, the Molokai girls are scheduled for a second match up with Seabury as well as Lanai, and the MIL Championships are just around the corner on Jan. 23-25. But DeRouin said his team need not get too comfortable with their game.

“Seabury is a very good team and we can’t take our record for granted,” he said. “Everything depends on the MIL championship.”

DeRouin said so far this season, he’s enjoyed working with the girls and they are constantly growing as athletes. He said if they continue to work hard on the court, he’s confident they should be able to make it to the state championships.

“We thank the support of the Molokai community through this stretch of home games,” said DeRouin. “Now all of our games are on the road and it’s difficult to win on the road but our mindset is to win the MIL champ and we’re going to work hard to get there.”