Gabbard to Assist Veterans in Completion of Center 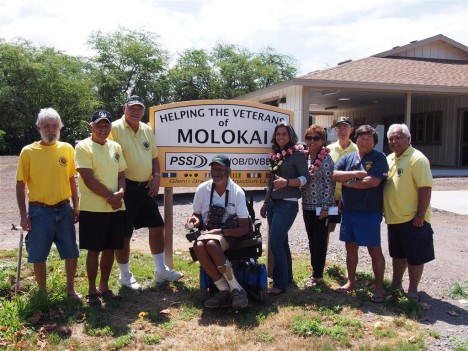 After a nearly decade-long fight to build a veterans’ center on Molokai, including a few years in the construction phase, the building still isn’t finished. But Molokai veterans hope that a visit last week from Rep. Tulsi Gabbard, herself a combat veteran with the Hawaii National Guard, will help spur its completion.

Inside the painted but empty interior of the building on Kaunakakai Place, Gabbard talked with members of Molokai Veterans Caring for Veterans (MVCV) about the challenges they are facing with both the center and receiving services on Molokai. She also honored the late MVCV Commander Larry Helm by visiting his family and promising her support to complete the center, which was his dream.

“I absolutely want to help you,” Gabbard told veterans, while sitting with them on plastic chairs surrounded by piles of lumber. “I’ve been wanting to come see where you guys are and see how I can help.”

Appliances for the certified kitchen are awaiting installation, which he said he hopes will be completed in the next two months. He estimates installation costs to be $28,000, which will be covered by the last of the group’s building budget.

“We got money to finish the inside,” he said. “The outside is what we really need funds for.”

The county requires a paved parking lot before granting a permit of occupancy — an undertaking that was priced at $115,000 last year, according to Dudoit.

They also need to install drainage for the parking lot, gas tanks and hook-ups, and fire suppression on the roof once the kitchen is finished. The building’s electric system also still has to be completed. Dudoit said the water hook-up should be done in the next week. Engraved tiles purchased by supporters as a fundraiser for the center last year will also be mounted on a wall outside.

All of that could cost roughly $200,000 to $300,000, estimated Dudoit. He said veterans will be gathering this week to make a complete list of everything that still needs to be done, along with a line-item budget to send to Gabbard at her request.

“We’re hoping to reach out and inform a lot of people… to raise awareness,” said Gabbard. “Government funds are going to take too long — these vets have been waiting too long and the last thing I want to do is delay completion… We’re not talking about [raising] millions — it’s doable.”

“We need to feature some stories of these guys… I know it will move people like it moved me,” she added.

Gabbard also proposed requesting the assistance of members of the National Guard for labor to complete construction once the money is raised for the materials.

“This is exciting — the light at the end of the tunnel is visible,” she encouraged Molokai vets.

Molokai veteran’s doctor David Hafermann discussed the challenges of local veterans receiving coverage and reimbursements for emergency room visits, which require a long approval process through Veterans Affairs (VA). With clinics on Molokai closed on the weekends, residents are left with few options and often turn to the hospital’s ER. Someone in the Honolulu VA office looks at hospital records, he said, and decides if the description fits “emergency.” One veteran was admitted for an allergic reaction to an insect bite that caused his leg to be severely swollen up to the knee. The VA later said they wouldn’t cover the visit, siting the reason for the visit as simply an “insect bite.”

Hafermann suggested that as the local physician, he should be involved in the review process for VA emergency medical coverage.

Dudoit said someone for veteran’s counseling used to come over to Molokai once a month to offer services, but vets were recently told that would no longer be possible because of lack of funding. In the future, the counselor could come every six months, but Molokai vets were free to call more often.

“I don’t want to talk to you on the phone, I want to see you face to face,” said Dudoit. “He used to come all day and not even eat lunch — that’s how booked he was.”

Gabbard thanked vets for raising these concerns and promised she would see what she could do.

“The problem… is not understanding the uniqueness of where we live,” she said.

She suggested she could help organize a veteran’s event to bring over VA staff to assist with benefits claims, counseling and other needs.

“We would set up a one-stop shop for that day,” she said. “It’s something they’ve done on Oahu so there’s a model to work from.” 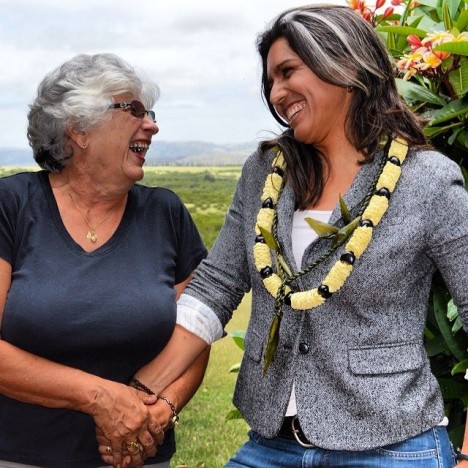 With Helm having passed away after losing a battle with cancer less than a year ago, Molokai veterans have missed his leadership and vision.

Dudoit himself said he only got involved in the building project last year.

“I got involved because I went up to Larry’s house a week before he died and he asked me to help,” he said.

Gabbard, too, had been moved to action by Helm, and after visiting with Molokai veterans, Gabbard had lunch with Helm’s family at their home. At Gabbard’s request, it was a chance to remember him and honor his legacy.

“It was comfortable, personal and heartfelt as we reminisced about my dad,” said Helm’s daughter, Nichol Helm Kahale, via email. “We enjoyed each other’s company in laughter, food and memory. He often opened our family doors to anyone (dignitaries, millionaires and the homeless) with genuine conversation, a meal and laughter. He would have been so happy to have this meal with her.”

Gabbard told Helm’s family of her plans to assist in fundraising for the building and assisting in its completion however she could.

“Our ohana was honored that Tulsi wanted to spend time with us remembering Larry,” said his wife Barbara Helm. “It feels so good to know she is following through with her commitment to Larry to bring his vision for the Molokai Veterans Caring For Veteran’s Center building to fruition.  Larry believed in Tulsi’s ability and passion to represent Hawaii’s veterans and all veterans.”