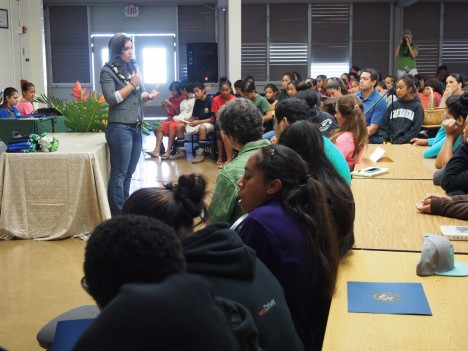 When Rep. Tulsi Gabbard visited Molokai two weeks ago, she talked story with an assembly of Molokai Middle School students and answered their questions, both probing and fun. The congresswoman told students that she works in Washington, D.C. about three weeks every month, and comes home to Hawaii to travel around her districts for about a week. Here are some of the questions students from the Middle School seventh and eighth grade Social Studies classes prepared.

Question: How has being in the military influenced the decisions you made?

Answer: The time I served in the Middle East on two deployments really changed me a lot and informed some of my policy positions. Having served in a place where life is so precious, where on a daily basis you’re faced with death and destruction, I learned firsthand what the cost of war is in a really human way. That experience is one of the major motivations I ran for Congress.

When I came back from my deployments, I saw that less than 11 percent of 535 people serving in Congress have ever worn a uniform. You compare that to the days when Dan Inouye and Dan Akaka were there, where there were over 60 percent of Congress members who served in the military. It was important to me to bring that voice to Congress because you have people making decisions about sending your family members to war and sometimes people who have not had that experience, take that decision lightly and not understand the seriously and responsibility that carries. War is ugly and horrible, and sometimes it’s necessary, but that decision must be made as a last resort because we understand what that cost is. The experience, memories, those who did not make it home and the generations who came before us, are the people I hold close to my heart and who I remember when these difficult decisions arise.

A: I think there is part of our constitution that allows the right to bear arms. I think we need to do more in two areas to try to prevent people causing harm to others. One is in the area of mental illness, in making sure those who need help receive that care and not owning guns. The other is closing some of the loopholes that allow those with criminal backgrounds to own guns. I think those are two things we are not doing enough of, but also don’t infringe on constitutional rights. We all want to figure out how we can prevent people from doing these horrible things [shooting rampages] but I think it’s important that any changes that are made, are changes that will actually do something.

Q: Who taught you how to surf?

A: I kinda taught myself how to surf. Maybe like some of you guys, I always loved the ocean from small kid time. I started body boarding and got bored with that so I borrowed my friend’s surf board and started paddling out, and eating it many times. I make time when I come home to at least go out a couple of times early in the morning before work. It makes me feel like a kid again, I don’t have to worry about anything. 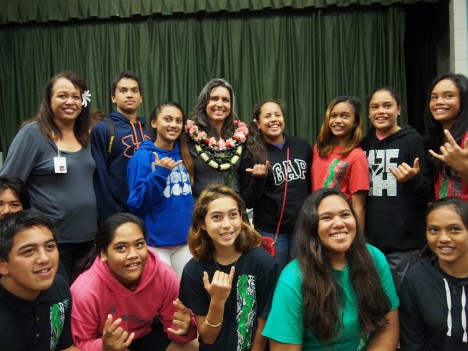 Q: Do people treat you differently because you are a young, female Congresswoman?

A: Yes! I don’t look like most people in Congress, or they don’t look like me. I think the average age in Congress is 65 plus. Outside Washington, it’s really awesome to hear from people who see a changing face of Congress — to see more women and minorities getting elected. We need to do more to have Congress be more reflective of the diversity across the country.

I was told when I came in, “Don’t bother trying to pass a law, because you’re young and you’re a Democrat.” If there’s anything that motivates me, it’s someone telling me I cannot do something. So I worked on introducing a law to help wounded warriors and disabled veterans, made friends with a lot of people and we passed a law that the President signed — one of only three new Democrats elected in 2012 in the whole country to have a law passed. Anytime someone tells you you don’t belong because you’re a woman, or because you’re young, or this or that, that’s where we stand up with pride — you can smile, you can say ‘aloha’ and then you show them why you can, and you get it done.

Q: Do you support the legalization of marijuana?

A: Medical marijuana is already legal in Hawaii. I think there is a strong argument to be made for decriminalization. When you look at the kinds of serious drugs we have in our system, it’s my personal opinion that marijuana doesn’t rise to the level of heroin or cocaine. When you look at our prison system, which is really what the question is about I think, should people who smoke marijuana be held in prison along with many other serious crimes? So it’s a big debate that’s happening across the country and should continue to be discussed and should reflect what the community is calling for.

Q: Should the U.S. require the labeling of genetically engineered foods?

A: I think there should be labeling of genetically modified foods. This is a controversial issue here in Hawaii and across the country. I’ve sponsored legislation to provide for this labeling and I think it is less an argument between people who are for or against it because it’s just a matter of information. We already require the FDA to provide labeling for so many different things. Because there is a sensitivity to genetically modified foods, there are a lot of people who are concerned about being able to make that choice about what kind of food they want to eat or feed their family. There are over 60 countries that already require labeling, and to me, it’s just a matter of empowering people to make their own decisions. I believe in freedom of choice, I think that’s who we are as a country, and I think this is very much in line with that.