Future Scientists Get a Sense of Our Past

Every few years, science teacher Erron Yoshioka along with 15 eager science club members and two other teachers travel to Molokai from Moanalua High School on Oahu. During their spring break, they take in Molokai and gain a shared sense of history and perspective on some of the old ways and how it relates to their scientific lessons and explorations.

Sharing knowledge with those willing to learn is a specialty of 2013 Umu Kai Award winner Uncle Mac Poepoe’s, and on the students’ recent trip to Mo`omomi, learn they did. 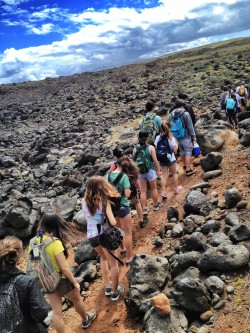 Starting at the main pavilion, the students were able to learn about pono fishing techniques, and how traditional Hawaiian practices tie in to the science of fishery management. In talking about the lobster depletion and new net ban, the students learned that a two-pound lobster takes 10 years to grow, and that any impact to any part of a fishery or ecosystem will take far longer to repair than it did to do the damage in the first place. When the students learned that the Mo`omomi fishery will take 30 years for the lobster population to recover from overfishing, eyes went wide, and they asked Uncle Mac good questions about conservation and the future of Mo`omomi and other fisheries in the Hawaiian islands.

Riding Molokai style in the backs of two pickup trucks, students were taken for a bumpy exciting ride out to an ancient fishing village, past a heiau and a caretaker’s residence along the Hinanaulua coast. With the rock walls of some hale still intact, walking along ancient pathways passing piles of opihi shells, it was a visual and spiritual feast for students and teachers alike.

Given time to explore the beach and comb for glass balls and other washed up stuff, the students all partook in their own ways, and a few man-made beach treasures were found to take home. Science club member Micah Sialana found a block designed to track ocean currents, and with his report of the find, scientists will know a little more about our ocean and environment.

It was clear that what was learned while exploring Mo`omomi was something that cannot be had in books, or even on other islands. The experience strongly reinforced the idea to the students and teachers that preserving the traditional lands and practices of the ancients and keeping the history alive, is not only pono, but a scientifically sound way to protect what we have for future generations. With a place like Mo`omomi, and a trustee like Uncle Mac Poepoe, future generations will be able to continue to connect with the past, and preserve the present as they move in to the future, our shared future.