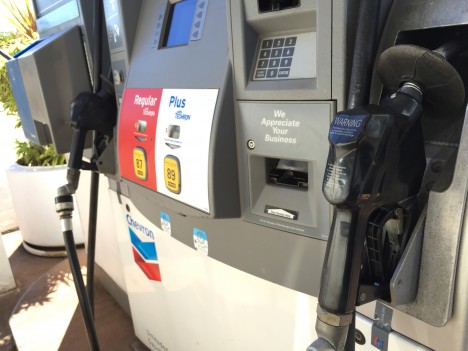 Recently, many Hawaii residents have been breathing a sigh of relief at the gas pump. Across the state and the country, prices have dropped more than a dollar over the past year and are continuing to fall.

A year ago, gas prices in Hawaii averaged $4.21 cents a gallon, according to price-tracking website GasBuddy.com. Prices are now at $2.89. The average throughout the U.S. is even cheaper, as prices have tumbled from $3.34 to $2.29 a gallon within the last year.

On Molokai, prices are also declining, but the overall rates are more than a dollar more expensive than rates on neighboring islands.

“Oil products are driven by supply and demand,” said Lance Tanaka, Director of Government and Public Affairs for Hawaii Independent Energy (HIE). “The global oil balance has been over-supplied and prices [have] fallen in the past 9-12 months including oil products and the Hawaii market.”

When it comes to individual gas stations, owners have relative freedom to determine their own prices. Experts say that it’s not government regulation that will guarantee consumers fair rates—it’s the natural competition of the free market. On Molokai, limited competition leaves little incentive for price drops.

However, despite Molokai’s higher rates, economists say it doesn’t mean gas stations are making more of a profit than other islands. Transportation costs and lower demand serve to make Molokai’s gas market a tricky business.

“This here is pretty much the lifeline of the island,” said Keoho. “Without the fuel everything goes down. The power plant goes out. Water won’t run. Stores that have [refrigerated] food, it’s gonna spoil. It also affects kidney dialysis machines.”

While Island Petroleum doesn’t set the prices, they determine how much fuel each distributor gets based on demand for a particular order.

According to the U.S. Energy Information Administration, gasoline prices per gallon depend upon a variety of factors, including global crude oil rates and local fuel taxes. Maui County has the highest combined county and state tax rates at $0.35 a gallon.

Transportation costs, said Keoho, largely affect the prices on Molokai, as they do for all products from gas to groceries. He added that gas comes cheaper for more populated islands that are “buying in bulk.”

“The same barge goes to Maui every other week,” said Keoho. “That tells you how much fuel they’re burning on Maui compared to what we’re burning here. If we were burning the same amount as Maui we’d probably be paying the same price as Maui.” 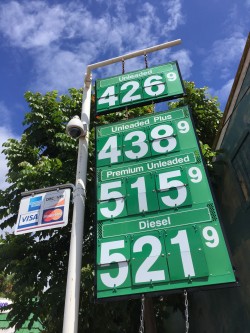 Rawlins Chevron owner Shirley Rawlins said Molokai prices tend to follow state and national trends but at slower rates because they have to wait for the next barge carrying the lower-priced fuel.

“You see on the news that it’s dropping, but you won’t see any of that happening [on Molokai] for maybe another month,” said Rawlins. “… At least we know if they say it’s dropping in Honolulu, our next delivery should be dropped in price.”

Other communities that depend heavily on the barge, like Lanai and Hana, also suffer higher rates than much of the state. A Lanai City Service Station employee reported prices similar to Molokai’s, at $4.43 a gallon for regular unleaded.

However, Fish & Dive owner Tim Forsberg said stations don’t profit as much from gas as consumers think—often the majority of their income comes from additional services, a point echoed by University of Hawaii economist Dr. Carl Bonham.

“Gas is not a very profitable venture,” said Forsberg. “We could not just make it on gasoline. You have to make it in other ways. … Renting out U-Hauls, retail products, maintenance stuff.”

While neither Rawlins Chevron nor Fish & Dive could divulge the base rates of fuel, both said their markups have remained the same for several years.

A decade ago, the Hawaii Public Utilities Commission (PUC) tried to regulate stations by implementing a cap on wholesale gas prices.

However, the gas cap failed due to laws that protect proprietary business information and the devastating landfall of Hurricane Katrina, said Alan Yonan, Jr., communications officer for the Hawaii State Energy Office.

“When Katrina happened, gas prices soared, so the gas cap sort of in a perverse way allowed retailers to jack up prices based on inflated amounts, because of this once-in-a-lifetime hurricane,” he said.

The gas cap was implemented in September 2005 and suspended in May 2006.

Since then, retail gas has no longer been under PUC jurisdiction, said PUC Chief Counsel Thomas Gorak. Officials at the state level, including representatives in the Attorney General’s office and the Department of Commerce and Consumer Affairs, said they don’t do any sort of price monitoring and weren’t aware of any state department that does so.

Regardless, gas caps might not be the answer, said Dr. Theresa M. Greaney, associate professor of economics at the University of Hawaii at Manoa.

“The difficulty with the concept of a gas cap is keeping up with what the market forces are going to be doing to the prices,” she explained. “… Sometimes your cap is going to be above what the market price is to begin with. And it’s hard for the government to continually be monitoring and changing a price ceiling or price floor.”

Bonham, executive director of the Economic Research Organization at the University of Hawaii (UHERO), emphasized that competition, not government regulation, is the way to create fair prices for customers.

Molokai has a low level of competition, but the island probably wouldn’t consume enough gas to support additional competitors in the market anyway, said Bonham.

When it comes down to it, consumers in search of fair gas prices face the same questions with other products and services.

“How do you know when you get a haircut that you’re getting a fair price?” asked Bonham. “… It’s the competition that’s really important. That’s true in pretty much any sector of the economy. The government is not tracking any prices we pay for produce and other things.”

Some utilities, like water or electricity, are regulated, but Greaney pointed out that these require different methods of distribution.

“For certain types of goods or services you would prefer that there would be only one provider,” she said, pointing to Hawaiian Electric as an example. “You really don’t want to have two firms in the market putting in competing power lines to provide electricity.” 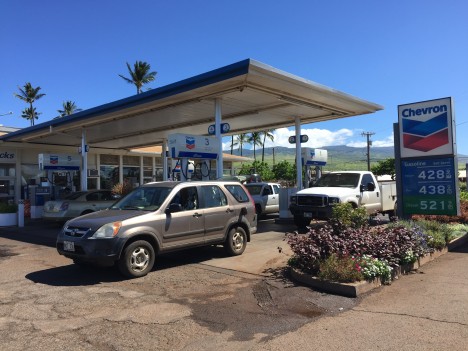 With two gas stations on island, Molokai has little competition, but experts say the island couldn’t support a bigger market.

For many Molokai residents, high prices are a fact of life.

“When I put in gas, I close one eye and just don’t pay attention,” said taxi driver Donald Gutierrez. “I don’t even look at the price. The main thing is you fill up the tank.”

Resident Coco Stone-He said she feels the rates are “a little high” but has learned to cope.

“Of course we’d love to see Costco prices but that just doesn’t happen here,” she said. “You’re getting gas from the mainland, you’re getting the boat from Oahu, you pay for every stage. You gotta live with it.”

Stone-He, who lives on the east end but works in town, said that to save gas, she tries to fit in as many errands as possible in between home and work. Other residents filling up at the gas station said they try to carpool or catch the MEO bus. Many were understanding of the high prices but admitted it was a difficult situation.

“I don’t know how people can live like this,” said resident Olelo Hamakua-Poepoe. “I give props to everybody.”

Meanwhile, Bonham said Hawaii’s gas prices are at or nearing the expected drop below $3 that UHERO calculated earlier this year.

“Some people think it could go lower. The oil market doesn’t seem to think that’s the case,” said Bonham, adding that it would take a major slowdown in the global economy for prices to drop even more, an unlikely scenario.

While Molokai is still likely to stay well above the state average, Bonham said the Friendly Isle could still see price declines as it plays catch-up with other islands.