Fuddy Given Final Salute on Molokai

Department of Health Director Loretta Fuddy was given a final salute when her casket left Molokai Monday morning. Molokai Fire Rescue and Police personnel accompanied her body to the airport, where it was flown to Honolulu.

“We saved eight,” paramedic Scotty Schaefer reminded fellow emergency responders, “because of what you did… We gave her a chance…Loretta was family to us.”

Fuddy was a passenger on Makaki Kai plane leaving Kalaupapa Wednesday that experienced engine failure and landed in the water just off the peninsula. Fuddy died in the water after exiting the plane. 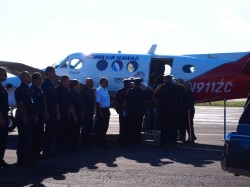 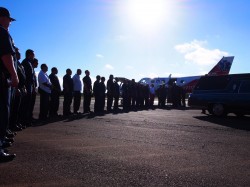