Fruit of the Land 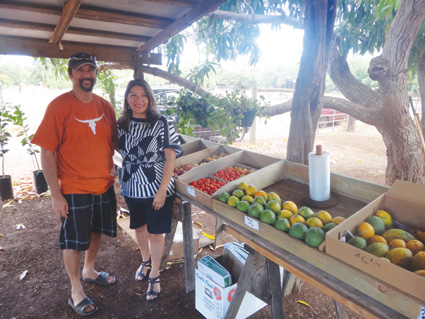 A few months ago, Kalamaula Homesteader and third generation farmer Gene Ross Davis found himself in a predicament. His tomato crops had yielded too many tomatoes for on-island consumption, but not enough to ship off-island. In order for it to be profitable for him to ship his tomatoes for sale off-island, he would need enough to fill an entire palate of 25-pound boxes –nearly 500 pounds total of tomatoes. With the help of his wife Rosie, Davis found another way to market his produce –he opened a fruit and vegetable stand on his property last week.

“This is the most ideal situation,” he said. “I can market from my yard and continue to farm every day.”

His farm, covering just under five acres, was passed down from his grandparents, who were among the first Hawaiian Homesteaders in the 1920s.

Davis grows tomatoes, bell peppers, cilantro, zucchini, green beans, citrus fruit, papaya and “whatever else is in season.” This produce, along with seedlings and young trees from his farm that he pots for sale, make up a large portion of his fruit stand offerings. Nearly everything else, from avocados to eggplants, is supplied by friends and fellow homestead farmers.

Davis buys produce from friends at wholesale rates, and then sells it from his fruit stand at affordable prices.

“As a farmer, it’s one thing to grow everything but it’s another thing to go and sell it,” said Davis. “A lot of small homestead farmers always have [enough] for the home but don’t have any market for their excess, so I help with that.”

“For people in town, this is a lot closer than Kumu Farms, so it’s convenient for us and we don’t have to wait till Saturday to get fresh fruits [at the Kaunakakai market],” said resident Desiree Cabreros, who stopped by Davis’ homestead to pick up some produce. “It’s all about trying to help the ones who grow over here.” 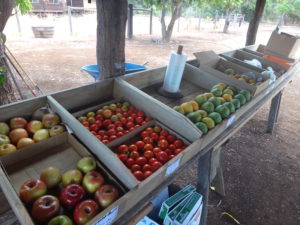 Providing the community with quality produce is one of Davis’ top priorities.

“This is a means of keeping some of the product on island for our people,” he said. “[This way], you know what you’re eating –your own products, island products.” It also provides local farmers with an outlet for off-grade produce, while simultaneously offering goods at cheaper prices, he added.

Davis also offers produce boxes at $20 each, with delivery available upon request. Each box contains 10 varieties of produce ranging from lettuce, potatoes, green beans, apples and whatever else is in stock.

The fruit and vegetable stand is located at Davis’ residence at Kalamaula Homestead. It is open six days a week, from Mondays to Fridays from 10 a.m. to 5:30 p.m. and on Saturdays from 8 a.m. to noon.

3 Responses to “Fruit of the Land”