From Passion to Power 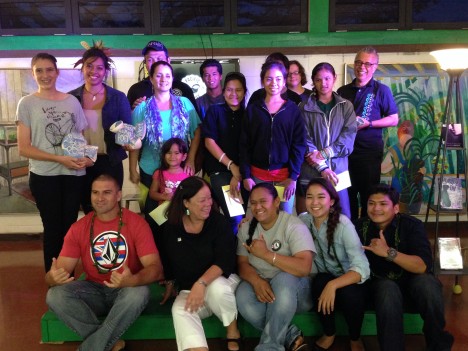 Slam poetry has emerged in Molokai schools among students and teachers bringing literary talents to the microphone to spit poems from the depths of their souls.

“When you write slam poetry, it’s an emphasis on your passions,” said MHS Hawaiian Language Immersion senior, `Apelila Ritte-Camara-Tangonan. “My passion and fire burns with my [Hawaiian] culture. I know a lot of people share the same fire and…for me self-expression through music, art or slam poetry rekindles my fire.”

Ritte-Camara-Tangonan was one of 13 rising slam poets who threw down, going word for word in the MHS Library last Tuesday night in the first ever Hana Hou Poetry Slam Competition.

“Slam poetry is performance poetry. It’s not Edgar Allen Poe, Shakespeare or what people might think it is in a school atmosphere,” said Jocelyn Ng, poet facilitator of Oahu’s Pacific Tongues Youth Speaks Hawaii, a nonprofit that cultivates writers and spoken word performers and one of the event’s sponsors. “It’s someone’s truth, story, opinion and ideas that are melted into a poem and shared with others.”

Ritte-Camara-Tangonan participated in slam poetry workshops held at MHS by Molokai slam poets Hano and Maile Naehu. She said she wants her poem to be the catalyst for passions within audience members and the Molokai community.

“I want to show them that it’s not hard and it’s an emphasis on how you feel about any and everything,” Ritte-Camara-Tangonan said. “There’s never a wrong answer. This is beautiful.”

Many of the poems performed related to personal experiences and Hawaiian sovereignty issues.

“We really wanted to give these kids a different way to express their emotions and viewpoints on certain worldwide or personal issues,” Hano Naehu said. “Words have meaning. Words can evoke and express what you have deep down inside and create emotion for all of us.”

Each poet had three minutes to recite original work in front of a panel of five judges, who scored the performances using Olympic-style voting, a score on a scale of one to 10, with 10 being the highest. The judges included Ng, Jason Mateo, Pacific Tongues executive director, Hawai`iloa Mowat, Molokai musician, Siri Anderson, retired librarian and Suliana Aki, UpwardBound Advisor.

“Being from Molokai, I’ve seen a lot kids deal with being shamed on this island,” Mowat said. “To see them out on the stage…and expressing themselves is awesome for this little community. This is a wonderful way to have a voice and let out that emotion or aggression.”

Mowat said slam poetry provides a constructive outlet for community members who may have a tough time expressing their struggles as a Hawaiian people.

Ritte-Camara-Tangonan mirrored that sentiment, saying slam poetry is a great way for people to embrace their Hawaiian culture.

“In my poem I talk about my culture and how being 50 percent Hawaiian has affected me,” she said. “It’s a number that limits us, to Homestead lands and certain privileges, and…I want [others] to feel proud of even the smallest percentage of Hawaiian they have.” 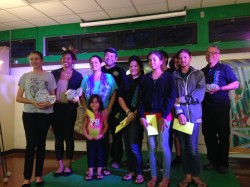 Diane Mokuau, MHS Librarian and advisor who helped put on the competition, said Pacific Tongues is hoping to partner with MHS next year. Mokuau wrote a grant with Pacific Tongues last month and if awarded the funds, the slam poetry nonprofit will visit Molokai three times to host workshops with MHS and MMS students and teachers.

“The words on the page are from you and about your experiences, and they’ve got to slam the audience and embed themselves in that person’s heart and mind,” Haase said. “[My performance] wasn’t as much for the audience as it was to prove to myself that I could do this.”

Slam poetry is a positive outlet for youth to share something that they can’t in sports, band or with their school counselor, but can share in their writing, Ng said.

“It’s history in the making,” Ng said. “Watching people from all ages get on stage, from a little girl to Rick [Ornellas], it showed diversity and everyone in the community.”