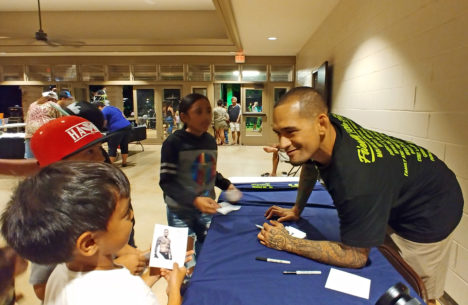 The first Friendly Isle Festival attracted hundreds of people to Mitchell Pauole Center throughout the day last Saturday. Whether it was for a sports clinic, to get some killer deals on clothing, for a bite to eat, to listen to live music or just to chat with one of Hawai‘i’s rising mixed martial arts stars, there was something for everyone in the ‘ohana.

Paulele Alcon, owner of Hawai‘i’s Finest clothing and concert promotion company, said it has been a goal of them since their beginnings almost 8 years ago to put together a free festival such as the one last week.

“We did concerts here and there, but we never put on a festival like this,” he said.

Former college and professional volleyball players came to Molokai just to teach the clinic. But they also had a chance to demonstrate their skills. At about 3 p.m., the former athletes split in two teams, and played an exhibition match.

“That was fun, the kids got to see a higher caliber of play they don’t get to see,” Alcon said of the exhibition game.

Meanwhile, the crowd was taking advantage of the insane deals on clothing going on inside the main hall at Mitchell Pauole Center.

At about 5 p.m., live music kicked off, and from then on more and more people started to arrive. To the right of the stage, the food booth was busy all night, while musical giants PeniDean, Fiji and Maoli performed onstage.

Inside the hall, Hawaiian MMA star Yancy Medeiros signed autographs for the children. A feared UFC competitor with a 14-4-0 record, Medeiros revealed his soft side to the Molokai children, distributing high-fives, smiles and autographs all night. The 30-year-old welterweight fighter from Makaha is scheduled to fight against Brazilian Alex Oliveira during UFC 218 in Detroit Dec. 2.

Hawaii’s Finest clothing started in December 2009, when Alcon and his brother printed a batch of 144 shirts to make some extra money for the holidays. Now, eight years later, they have expanded to stores on Molokai and Oahu, and sell their products to all Hawaiian Islands, Vegas and Japan. Along the way, the brothers started to promote concerts, the kind of concerts they would like to attend themselves. On the evening before the Friendly Isle Festival, Hawaii’s Finest threw a concert on Maui, which Alcon described as “huge” and “crazy.” But the one on Molokai was also quite big, with hundreds of people from all age groups attending the event, from tiny keiki in their parents’ arms to kupuna in wheelchairs.

“I just like to thank the island for supporting (us),” Alcon said. “Without Molokai we wouldn’t be in business.”

He said the first years of his business were rough, but they pushed it through with support from the Molokai community. Soon, the rest of Hawaii and beyond caught up to Hawaii’s Finest, making them a successful business. But Alcon never forgot where he came from.

“I was born and raise a mile from here, so it’s good to give back,” he said, pointing east of Mitchell Pauole Center.