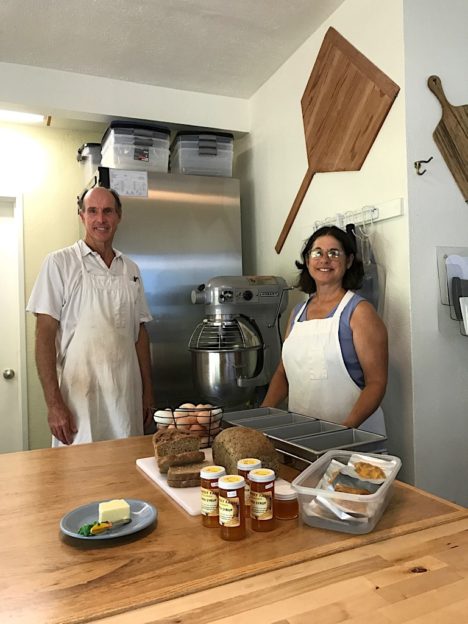 Here on Molokai, Friday afternoons are all about winding down and getting ready for the weekend.  But for Gene and Beverly Ferguson of Friendly Farm in Puko`o, Friday afternoons are when things really start to heat up.  They start pulling large strap pans of their coveted organic sourdough bread out of their convection oven and lay them out on the rack to cool, in preparation for Saturday morning’s farmers’ market in Kaunakakai.  Demand for their fresh-baked bread is great enough that many customers have put in their orders each week before the dough has even risen, and the Fergusons have become accustomed to their new moniker: “The bread people.”

“The most fun part is when people show up that hadn’t been there before and they say that somebody gave them a loaf, or they tried it at somebody’s house, and they liked it, so they tracked us down.” said Beverly. “And they come up with kind of a puzzled look, ‘Are you the bread people?’ That’s a really fun thing.” she said.

Indeed, the couple’s small bakery and farm has developed a passionate following on Molokai in the two short years they have been selling their bread, and will often sell out of their most popular products within the first hour or two of the Saturday market.  Resident Chris Hammond is one of many regular customers who makes it a point to get to the market for his wife’s favorite: black sesame sourdough.

“The bread is just better for my wife, because it’s fermented in a way that they don’t do commercially,” he said. “ For people that have a hard time with gluten, this bread is the easiest one for them to digest.  And also it’s delicious.  The sesame sourdough, soak that with butter, and you don’t need anything else.”

The Fergusons have set up a weekly email list and say they’re always willing to hold orders for their customers who can’t make it right when the market opens.  “People that come regularly, and live here, we want them to be able to get the stuff they want, and not stress about it,” said Beverly.

At the Friendly Farm booth, shoppers will find a wide array of organic sourdough breads, like black sesame, caraway rye, focaccia, onion rolls, baguettes, cinnamon raisin walnut mini-loaves, and more.  The booth also boasts freshly baked coconut chocolate chip cookies, lilikoi syrup, jackfruit jerky and seasonal fruits and vegetables.  The loaves range in price from $5 to $8, and the Fergusons say that it’s the residents of Molokai, not necessarily the visitors, who see the value in their bread.

“The residents of the island is what supports us,” said Beverly.  “We’re not tourist-based.  Tourists might come by and they’ll look, they’ll try it but, they don’t quite get it.  But the people that live here do.”

Back in 2005, the Fergusons themselves came to Molokai as tourists from Sacramento, California.  Gene, a pilot, who owned a cropdusting business, and Beverly, who worked at University of California Davis as an editor, had been considering a move to Hawaii once their five children had all left home.  After traveling to several islands, the pair made a stop on Molokai, and knew right away.

“When we touched down on Molokai it was just this very peaceful feeling, ‘We’re home,’” said Beverly. “We were just homesick after that for Molokai,” added Gene.

After five years of planning, they moved to the island, and began the first of a series of small business and farming ventures, including an air tour business called Kukui Air.  Their paths took an unexpected turn, however, when, in 2015, they began talking to Lucas Ruppel, of Bacillus Bakery, about taking over his business when he moved away.   Before leaving, Ruppel came to the Ferguson’s home for three days, and taught them his unique methods and recipes, leaving them with his sourdough starter.   Since renovating the ohana house on their property into a small bakery, the Fergusons have been able to increase their volume, and make the business their own by writing their own recipes, something which they say they are very proud of.  Offering this unique product to the people of Molokai has also proven quite rewarding.

“It’s not going to make us rich, but it’s very satisfying and it provides something that’s necessary,” said Beverly. “For a community to have food is a necessity.” Gene agrees, “You’re making something that people really appreciate and love and they’re very thankful that you’re here doing that. That’s worth a lot to me.”

Friendly Farm is located at 8695 E Kamehameha V Highway.  You can purchase their products directly from the farm, or at their booth at the Saturday farmers market.   You can contact them at molokaifriendlyfarm@gmail.com, or through their Facebook page.

One Response to “Friendly Farm Bread Meets a Molokai Knead”