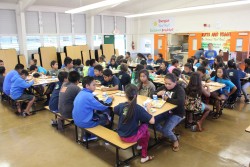 As part of a U.S. Department of Agriculture (USDA) program, free breakfasts and lunches will be available to students at all Molokai public schools starting this year. Those schools are among seven statewide that were selected by the Hawaii Department of Education (DOE) to pilot the program this year.

While many Molokai students already qualified for free or reduced price meals, educators say the new program will be a relief for many families who didn’t previously qualify and will streamline the dining process.

The federal Community Eligibility Provision (CEP) program, which debuted in Illinois, Michigan and Kentucky in 2011, gives free meals to schools in which at least 40 percent of students qualify for free or reduced lunches.

Office of School Facilities and Support Services Assistant Superintendent Dann Carlson said Molokai was selected because it offers all levels of schooling in one island community.

“We can get a true vertical look at elementary, middle and high school,” he said. “[Molokai is] small enough and contained enough that, again, we have the opportunity to run the numbers and see if it’s feasible.”

According to the DOE, the department was previously reimbursed $2.90 per lunch through student fees and federal funds. With CEP, the DOE will now receive a $3.67 reimbursement from the USDA. However, Carlson said that the state won’t be profiting from the program. 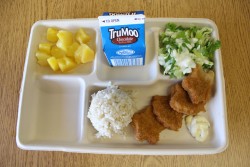 Parents can save hundreds of dollars with the free meal program. Lunch costs about $2.75 at most Molokai schools. Photo by Colleen Uechi.

To qualify, parents or guardians must fill out a survey reporting the number of students enrolled from their families and the household income level. Carlson said it’s vital to turn in the surveys because the data helps the DOE and schools qualify for other benefits.

In addition, free bus service to and from school will also be provided for students who meet certain distance requirements.

“The objective is to see what the impact is when those hurdles are taken away from a student,” said MHS principal Stan Hao. “Because nutrition is one and the other one is the ability to get to school. If those things are free what is the extent to which students and families will take advantage of that?”

Kualapu`u School began the free meal program last year, and principal Lydia Trinidad said that aside from creating less paperwork for both the school and parents, it was welcome break for many families who were paying full price.

“There’s no distinction between free and paid kids,” she said. “You still had middle class families still struggling to make ends meet, and it’s just a chance … [to] save some money.”

Read more about this program in next week’s issue of the Dispatch.