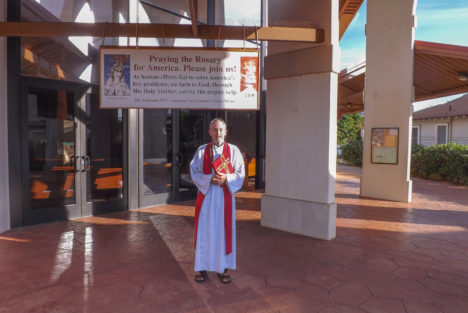 Father Brian Guerrini has served as the Catholic priest for Molokai’s St. Damien Catholic Parish for the past three years. Now, his time on Molokai is drawing to a close, with his departure scheduled for Oct. 1.

Guerrini of the Priests of the Sacred Hearts, the same order as St. Damien, has been on Molokai since the fall of 2019. His time on the island has been marked heavily by the COVID pandemic.

“The last three years have been rough still trying to come out of the pandemic,” said Guerrini.

As the only Catholic priest on topside Molokai, Guerrini is responsible for all four Catholic topside churches – St. Damien in Kaunakakai, Our Lady of Seven Sorrows in Mana’e, St. Joseph’s  in Kamalo and St. Vincent Ferrer in Maunaloa — two Catholic cemeteries, an office, a cottage, classrooms and rectory. Guerrini’s time on Molokai has been defined by YouTube masses, diocesan duties and the “gutsy, strong people” who call Molokai home.

Guerrini’s journey to Molokai was unexpected in many ways. Hailing from Indiana and a meteorology major in college, Guerrini worked for 10 years in a variety of jobs from New York to California as a meteorologist and air pollution specialist.

An application to the Sacred Hearts novitiate in 1986 led to a life of religious service. After receiving his master’s in divinity, Guerrini served as a religious brother for more than 20 years, until he was ordained a priest in 2008. As such, he served in parishes and high schools in California, New Mexico, Texas, Fuji and Tonga. Before arriving on Molokai, he spent time at the Mexico/U.S. border hearing confessions and saying Mass in Spanish. Guerrini also noted the odd propensity with which natural disasters have followed him throughout his career: the San Francisco earthquake, Oakland Hills wildfires, a massive cyclone on Tonga, and then COVID.

In speaking to the future needs of the Molokai Catholic community, Guerrini explains the necessity of preserving and protecting the four topside St. Damien Churches.

“We are the forgotten Molokai,” he commented, explaining that while the Catholic historical importance of Kalaupapa is widely understood and appreciated, that of topside Molokai is not. According to Guerrini, topside Catholic churches need to be designated as diocesan shrines.

“The struggle,” he said, “is to preserve [the churches’] historical significance in a way that is respectful to Native Hawaiian culture.”

Guerrini’s future plans include hopefully a year in Rome doing research for a book on the history of Catholicism on Molokai – which predates St. Damien, going back to at least the 1840s. He also hopes to send a letter to the King of Belgium, asking for assistance in funding church preservation efforts.

What will Guerrini miss about Molokai?

“The simple way of life,” he said, and “The people who have lived here all their lives.”

The new Catholic priest, Father Patrick Fanning of the Sacred Hearts, will arrive on Oct. 20.