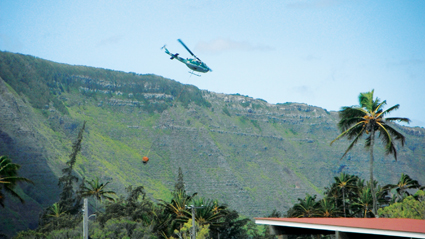 Helicopters will continue transporting concrete from topside Molokai to the settlement for pier repairs until Thursday. Photo courtesy NPS.

It’s been a noisy week for the Kalaupapa settlement. Helicopters have been transporting mixed concrete from topside Molokai to the settlement for repairs to the historic pier since last Monday. The $5 million repairs should fortify the pier for the next 50 to 75 years, according to Steve Prokop, superintendent of the Kalaupapa National Historical Park.

The pier, which is over 75 years old, requires repairs on a regular basis after being pounded by winter surf on the north shore of Molokai, said Prokop. The pilings, or large posts that support the pier, are worn and the bulkhead wall below the warehouse building has deteriorated over the years. They hope to fortify the pier and surrounding area by injecting cement –over 150 yards –directly into weakened areas, according to Prokop. 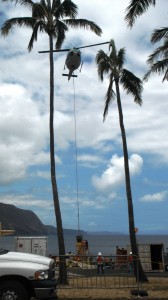 “It is extremely expensive to maintain a structure in such a dynamic ocean environment,” said Prokop, via email. “However, the pier is the lifeline for the Kalaupapa community to receive bulk supplies and materials via the annual barge delivery in July.”

The costs for the pier improvement project were paid for entirely by the National Park Service (NPS). Because the pier is considered a landmark historic structure, the improvements could not alter the appearance of the existing structure, a process which “took extra care” and led to extra costs, according to Prokop.

“These improvements are a demonstration of NPS’s long-term commitment to take care and maintain Kalaupapa,” said Prokop at this month’s community meeting last Tuesday.

Meanwhile, NPS maintenance workers have also been working on another historic landmark structure, the settlement’s old slaughterhouse. They recently installed a new hoist, which would make it a fully functioning facility, and fortified the structure while paying extra care to keep its “historic look”, according to Prokop. Additionally, workers are currently restoring a historic warehouse adjacent to Fuesaina’s Bar, and a large dormitory at Bay View.